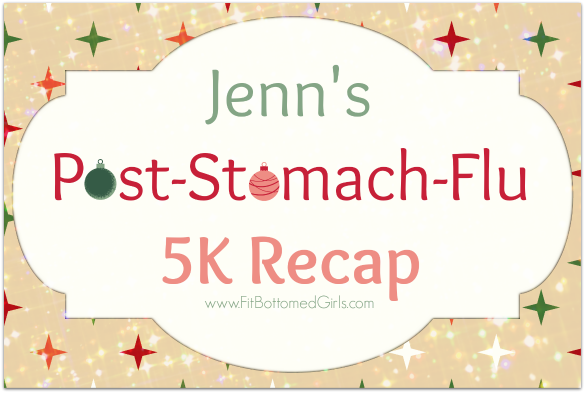 You know how I set that goal about a month ago to run the Jingle Bell 5K in 28 minutes or less? Well, that didn’t happen yesterday. But I’m going to go ahead and blame that on a little something called the Stomach Flu. Gross little bugger.

For the past month, I’d been running regularly, pushing my pace and getting mentally psyched up for the run. I’d been eating well, sleeping well and was in a nice and healthy groove. And then—boom! Thursday at 2 a.m., I was all kinds of sick. (I’m sure you’ve all been there so I won’t go into the icky details.) All into Thursday, I recouped on the couch, drinking Gatorade and trying to move as little as possible due to aches, chills and nausea. I also got a full 12 hours of glorious sleep. Friday, I was a little better and kept down some real food. And Saturday I felt well enough to give the Jingle Bell 5K a go on Sunday. And so I did.

My friend Rebecca was super thoughtful and picked up my race packet, so I didn’t have to get out of the house before the race. (Seriously, how nice is that?!) So the morning of, I put on my long-sleeved race T-shirt and shorts! 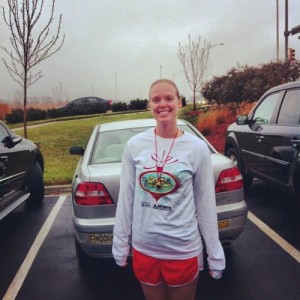 Shorts in December you say? Yes, indeed! Little fun geography trivia, the Kansas City area has quite a few caves here and there that a lot of businesses use for storage and even offices. So instead of running in the cold outdoors, this 5K is underground and in the caves, which are naturally climate controlled at what felt to be about 75 degrees (cooler and warmer in some spots than others) with all those people. It is pretty rad to run a 5K in a cave—it’s not nearly as creepy as you might think. For better or worse, I didn’t see a one bat, stalactite or cave monster. (Bats and cave monsters, better; stalactites, worse. I kind of love stalactites.) But I did see a lot of runners, and a lot of them were from my gym the Fit Pit, as we had the largest group there. (Woot! Woot!) 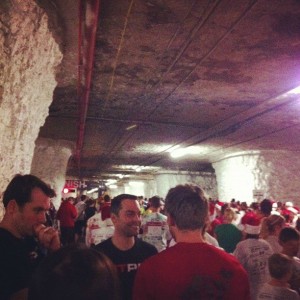 The course was two loops around the caves with plenty of turns and curves and a few mild ramps up and down. It started out a little packed at the start, but within a half mile, I had found my pace and quite a bit of room, which was nice. What was not nice? My stomach. Clearly my body was like, “What the freak do you think you’re doing?” and my insides protested. I may have spent all of mile two praying to the Stomach Flu Gods to not let me get in a “situation” without a portable toilet around, as there were few options to “go” out on the course.

At mile 2.75, I picked up the pace just slightly as my stomach and I were definitely ready to be done. And then at mile three, I gave it all I could. While I crossed the finish line at 29:06, a full minute-plus over my goal, I still felt proud of myself. Just a couple days after being that sick, I listened to my body and pushed it—without pushing it too far. I got nice and hot and sweaty, and I definitely worked up an appetite. (Note: Ryan is my running hero. He did it in 26:16 after having to “slow down” at mile three due to a side cramp.) 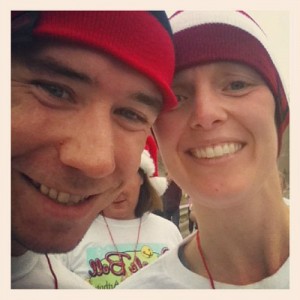 I forgot to take a photo, but the gym hosted a pancake, sausage and coffee breakfast after the race, and it was delicious. By far the biggest meal I’d eaten since pre-Stomach Flu, I had three big ol’ pancakes, four tiny sausages and half a cup of coffee. Take that stomach flu!

Have you ever gotten sick the days before a race? Did you rest, hydrate and fuel to recover? Or did you not get as lucky as me and have to bail? Oh, and stay tuned next week for the meal and easy recipe that helped me fuel up for this 5K! —Jenn