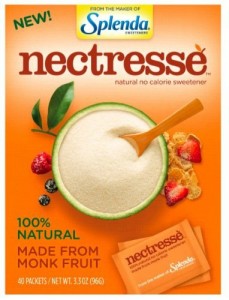 We have the 411 on the Nectresse ingredients.

You guys remember a few months ago when we tried Arctic Zero and pretty much flipped over the natural low-calorie-sweetness power of monk fruit? Well, as we suspected, monk fruit is getting more and more popular. So much so that it caught the eye of the maker of Splenda, who launched Nectresse, its own all-natural sweetener made from monk fruit. And, we got to try it!

We’re usually not into the whole artificial sweetener thing, as most aren’t very natural or have a really bad aftertaste. So we wanted to see how Nectresse stacked up. Made with the aforementioned monk fruit extract, Nectresses’s ingredient list also includes erythritol (a sugar alcohol that naturally occurs in fruits like pears and grapes), sugar and molasses. A packet is said to have zero calories (although, full disclosure: manufacturers don’t have to list anything less than 5, so don’t go cray-cray with it), has non-GMO ingredients and tastes pretty darn good. It’s sweet with a slight honey richness to it, and a little goes a long way. Since it’s sweeter than sugar, I can easily use just half a packet in my oatmeal or smoothie for a sweetness of my liking.

Unlike some other low-calorie sweeteners (artificial and not), this stuff dissolves like sugar and works well in both hold and cold things. While it does have a bit of an aftertaste, compared to something like aspartame or stevia, it’s not even a contest. Nectresse has just about the least icky aftertaste of all of the low-calorie sweeteners we’ve tried. And that’s saying something. While I do wish Nectresse had just monk fruit in its ingredient list, if you’re in need of a better-tasting low-calorie sweetener, this is definitely one to give a go. Taste-wise, you can’t really beat it!

Have you tried Nectresse? What do you think of its ingredient list? Sweet taste? Share your thoughts! —Jenn