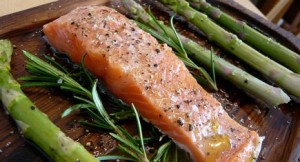 Salmon on the grill…what were we thinking turning that down?! Credit: WordRidden

As a little kid, I was a picky eater. Meat never turned me on, and anything green and nutritious was my enemy. Stubborn brat that I was, I almost always emerged victorious from the “you can’t leave until your plate is clean” battlefield. No wonder I was a scrawny little thing.
I’ll eat almost anything now though, and I usually crave more salads than sweets—but it was an uphill climb. So what is it about certain foods whose very presence still makes us run screaming from the table, or, perhaps in polite company, simply decline? I have a theory. Somewhere in our childhood we had a bad experience—or worse than that: NO experience whatsoever and decided right then and there that we hated [insert your own offending food here] for life. How sad.
Case in point…

Healthy Foods I Used to Hate

1. Salmon. I grew up in the Midwest. Guess what we don’t have a lot of here? You got it: seafood. (And what we do get has often been in a deep freeze for God knows how long.) So I really didn’t have a lot of experience with salmon unless you count the patties my mom use to make out of canned salmon—bones and all. It gives me the willies just thinking about it.
I tried cold smoked salmon and was unimpressed. There were better appetizers to choose from as far as I was concerned. So I simply put it on my do-not-eat list. Oh, I probably had it a couple of other times at some function where I had no choice, but I would never purposely choose it. That was until a friend of mine grilled me some fresh (like eight-hours old) salmon he caught in the Great Lakes. Flaky and oh-so delicious, I could have wept from all the wasted years.
2. Brussels sprouts. First off, they just looked weird. I’d push my Brussels sprouts to the side of the plate, and they’d just willfully roll right back—frustrating. I doubt that whole “baby cabbage” thing has convinced many 8-year-olds to give them a go. Secondly, I was not a big fan of coleslaw or sauerkraut, so this distant family member could just stay, well, distant.
That was until a bartender at a gourmet pizza joint insisted I try them as an appetizer. Sliced in half, they had been sautéed with pancetta, cranberries and almonds until caramelized. Fabulous. Who’d have thunk it?
3. Cucumbers. I can’t truthfully say I had an aversion to these guys. What I hated was the consequences or, more succinctly, the belching and bloating. It was just not worth it, so on the list they went. I picked through hundreds of Greek salads and looked on wistfully as others wolfed down gyros smothered in tzatziki sauce.
It wasn’t until I was introduced to the English Cucumber, also marketed as the burpless cucumber, that I fell back in love. Of course they are more expensive, but they can be found year round and are actually milder and sweeter than the regular variety. Cool and refreshing—oh baby, I missed you.
4. Sardines. I use to watch my dad eat these and think: Man, you have got to be kidding! Manufacturers tried to disguise them in mustard or tomato sauce, but as the saying goes: “You can’t make a silk purse out of a sows ear.” Or can you?
Since the only way I had ever seen anyone eat them was to just pop open a can and chomp away, it never dawned on me to actually try to create something with them. That was until I was introduced to Hidden Sardines, a tasty little appetizer number my friend had thrown together using sardines, hot sauce and puff pastry. I had already scarfed down three of them before she told me what was in them. Sometimes ignorance is bliss.
5. Pumpkin. Last Thanksgiving, my boyfriend announced he hated the taste of pumpkin and banned it from our menu! How could anyone not like pumpkin—especially pie? All smooth and creamy and holiday-ish, what is not to love? I like it warm with whipped cream or cold for breakfast. Only getting it a couple of times a year practically guarantees one will never grow tired of it, so what the hell was wrong with him? Was he raised by wolves?
Pumpkin-lover that I am, I could not let this be. I set about creating a pumpkin dish he would enjoy. I ended up with a baked-pumpkin stuffing that had onion, mushrooms, bacon (he can’t resist bacon) and savory seasonings. He loved it. It wasn’t pie, but at least one entire food was no longer ostracized from his diet. Victory!
It just goes to show that one crappy sampling as a child is simply not a good measuring stick. They say it takes approximately 10 tastes of something before our taste buds can decide if we like it or not. Besides, not everyone is Rachael Ray in the kitchen—it truly may have been crappy!
If you need more proof that the one-and-done theory is incredibly flawed, look at it this way: Most of us didn’t like beer right off the bat either, but over time have grown quite fond of that golden elixir. If we continue to eat as we did when we were kids, we are going to miss out on a lot of variety and good nutrition.
In this ever-shrinking global society that we live in, fun new foods practically show up daily, so to all FBE readers, I am throwing the gauntlet. Challenge yourself to eat one new food this week or give one of your un-favorites another taste. Try replacing spinach with kale in your favorite recipe. Whip up a batch of quinoa for breakfast. Order the elk loin for a change. Be brave—go forth and conquer!
Oh and oysters. I still can’t do it, won’t even try. I guess I still have some growing up to do…
What foods did you use to hate but now love? Any you need to try again? —Karen