Just a reminder that this is our new feature called Workout I Did. Read them all and feel the workout love here! 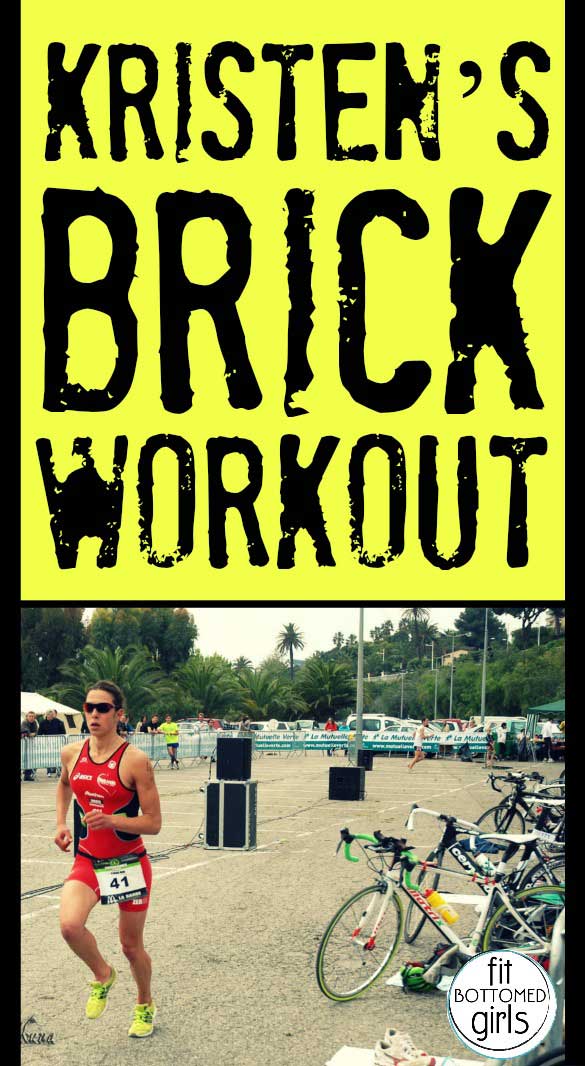 Brick. It’s a word that strikes fear in the hearts of basketball players everywhere, and also? It makes triathletes a little nervous, too.

A brick is a workout that combines two of the disciplines of triathlon—most often, bike and run, but it could also be a swim to bike—with as little time between them as possible to simulate the race-day experience. It’s not just a matter of building the endurance completing that both of those parts of the race require. It’s also to help an athlete get used to transitioning from one to the other, which is harder than you might think.

You know how after you’ve been on the elliptical or stepmill or treadmill or Spin bike and you step off and everything is like WHOA? And it takes you a moment to get your bearings? A brick gives you the opportunity to work through that feeling and learn what you need to do to get your running legs back as quickly as possible. You know, so you can then run a marathon after biking 112 miles. Theoretically. Your distances (and mine) may vary. Like, a lot. But the concept is the same.

So, my brick! The workout itself wasn’t all that exciting, but considering it was the first real brick I’d done this year, the results were thrilling.

Part one: Get on your bike. For me, this meant a 40-mile ride on roads near my house, which included some hills and headwind. Because 40 miles wasn’t challenging enough on its own. I broke up the time by pushing my pace for 10 or 20 minutes, then giving myself five or 10 minutes to go easier and get my heart rate back down. I played around with gears, holding a really high cadence (the speed at which your pedals go around) in a light gear, then going to a heavier gear with a lower cadence.

In a race, I’ll always switch to a lighter gear and higher cadence for the last couple of miles—it’s easier for me to let my calves and hamstrings loosen up and relax in the lighter gear, and I want my legs to feel as awesome as possible going into the run—so that’s what I did here. I pulled up to my garage, dropped my helmet, switched my shoes, and hit the road.

Part two: It always feels weird to run straight off two-plus hours on the bike, and this was no exception. I didn’t make any sort of pace goals for this workout; it was just a matter of shaking out my legs and finding good form as quickly as I could. And, besides, I was only running for 10 minutes, so I wasn’t really going to complain if I couldn’t hold my ideal 10-minute-a-mile pace, you know?

But I looked down at my watch to see a 9:30 pace. And even after I focused on trying to slow things down a bit, I kept things right around that pace. It was kind a big deal for me, considering at my first race last year I was gasping and barely on the good side of an asthma attack a few minutes into the run. This was a good sign.

I held that pace for the duration of that short little run, and the good news is that I totally could’ve kept it up, at least for a little while. I hold no illusions that I’ll be running a sub-10-minute-a-mile pace pace next month in Tempe, but knowing that it’s in me? Well, confidence-building is definitely a big part of doing a brick, and in this case, it worked like a charm.

Have you ever done a brick-like workout, either for triathlon training or just for, um, fun? —Kristen