Sometimes my husband’s workouts are crafted and thought out with tons of love in mind. When this happens his boot campers become scared. Why? Because he created a workout to help each person remember our anniversary called “The 9/13.” Sounds easy enough until you start to do the math and figure out just how many exercises your body will be completing. It’s a beast, totally doable, but a beast nonetheless!

We introduced this workout to the teams the week before we got hitched and now they do it as homework when we’re out of town or just need to shake things up a bit. It melts my heart, it really does. If you’re ever in need of a super intensely good workout, but don’t have a lot of equipment then this is the beast for you! 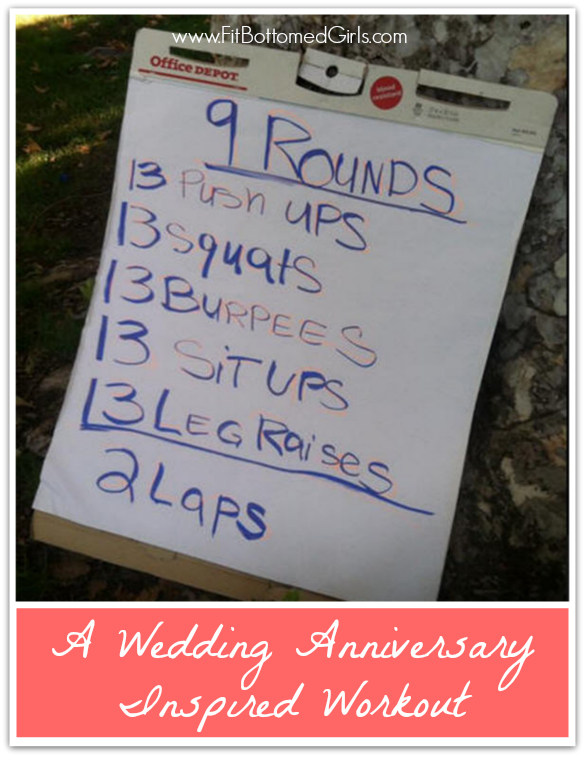 The board pretty much shows the way. You do nine rounds of these five exercises, 13 times. I gave the girls an option to choose when they’d run. They could either run at the end or sprint in between each round of workouts and mark off their completions. They chose the latter, because they are all amazing and awesome. (It’s more running in the end.) If you’re doing this in your neighborhood, run around your block twice. If you do it in a gym like I did, then run half a mile at the end of your workout.

It was hilarious how many people were HATING the date of our wedding during the workout, but the fact that many of the gals have since done the 9/13 again lets me know we chose a pretty groovy date to get hitched. Peace, love and workouts! —Tish