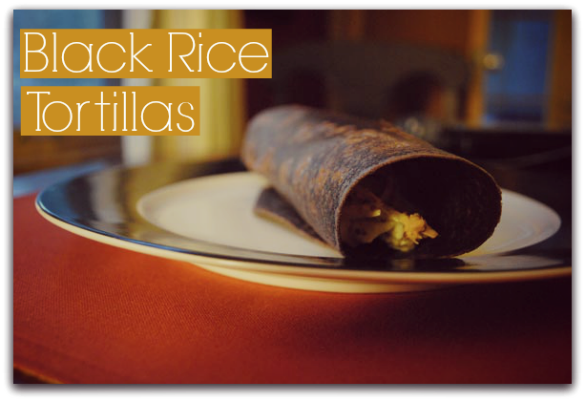 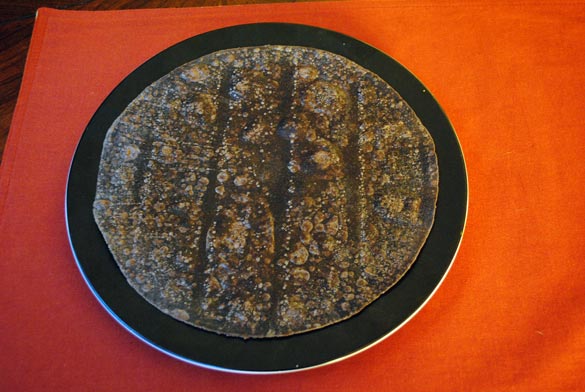 Ah! What’s that you ask? Is it a horribly old and moldy tortilla that’s been forgotten at the back of the fridge for too long? Nope. It’s a bit of a superfood actually. And that black color? Proof of all of its healthy amazingness.
Ladies and gents, give a warm welcome to my gluten-free friend, the Food for Life Black Rice Tortillas. 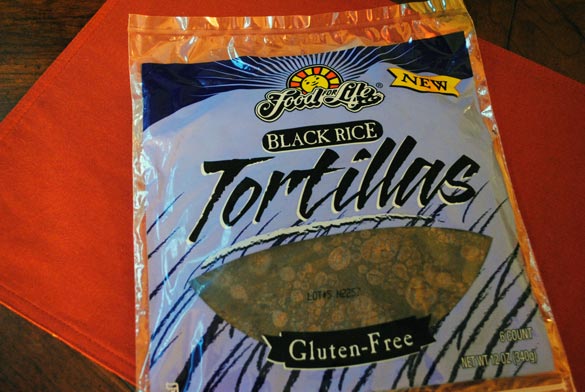 Never heard of black rice tortillas before? Me neither! Turns out, according to Food for Life, the tortillas’ dark color (which is perfect for Halloween today, don’t ya think?) is primarily due to the anthocyanin content in the super grain black rice used to make it. Anthocyanin is the same antioxidant found in blueberries, blackberries, dark cherries and acai. You know, other superfoods.
Despite it looking a little (okay, a lot) different than your usual tortilla, there’s nothing scary in its nutritionals or ingredient list (I spy chia seeds!). The Black Rice Tortillas are 100 percent vegan and gluten-free and free of conditioners, additives, artificial flavors, colors and preservatives. With 170 calories per really big black rice tortilla, they have 4 grams of protein, 2 grams of fiber and 30 grams of carbs (1 gram of sugar) in each serving. They also have a little iron, vitamin E, thiamine, niacin, phosphorus, vitamin B6 and magnesium in them — woot! 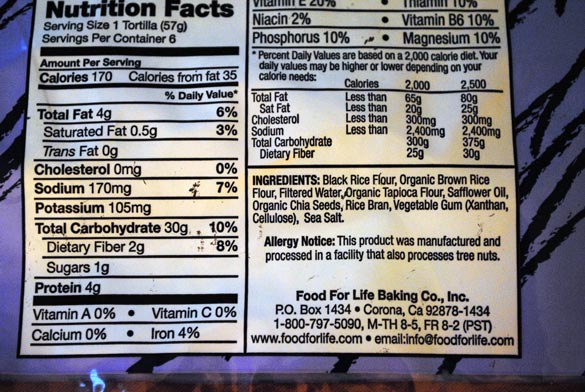 I tried these a couple of ways. First, plain. And I’ll be honest, they have a very natural taste. These have a lot more flavor than your everyday tortilla, and it’s kind of like munching on slightly salty whole grains. If you’re used to eating vegan or health food products, you can probably get used to it, but if not (or serving to someone isn’t), you’re probably better off going with a more conventional tortilla.
That said, the au naturel flavor is greatly helped (and maybe even enhanced but in a good complementary way) when you actually put things in it/on it. (Which makes sense — that’s kind of a tortilla’s purpose!). When grilling bison burgers one night, I used this as a “bun” of sorts, making a wrap of burger, lettuce, tomato, pickle and a little sriracha mayo (mayo + sriracha = heaven). Open-faced, it was pretty. (Orange and black for Halloween, woo!) 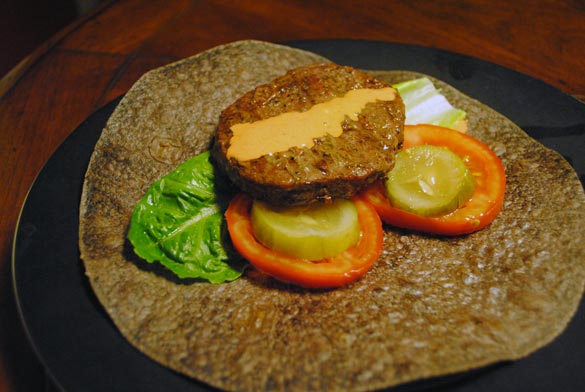 I tried to roll it up but, even after heating, the black rice tortillas aren’t super pliable. So instead, I folded it up, taco-style. 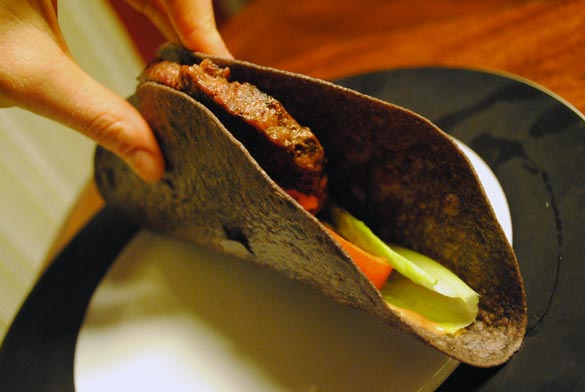 I had a little tearing with my burger taco, but the results were pretty delicious, and it was a nice change from my usual lettuce-wrap burgers I make. (If you eat buns though, not sure it tops that!) 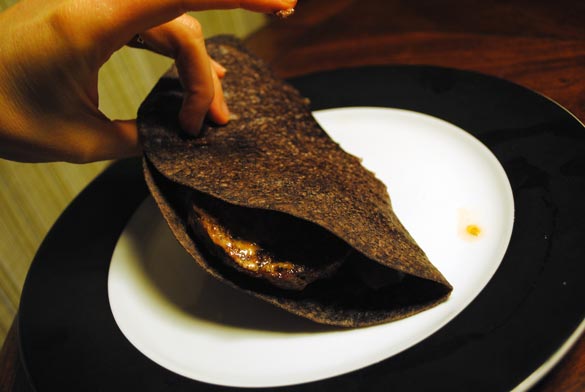 Another night for dinner, I tried an even better way to eat these black rice tortillas: tuna salad! I love wrapping up tuna salad in something, so it was an obvious choice. My tuna salad is pretty much just a can or two of drained tuna, chopped cabbage and chopped dill pickles mixed with mashed-up ripe avocado, whole-grain mustard and full-fat mayo with a splash of lime juice. 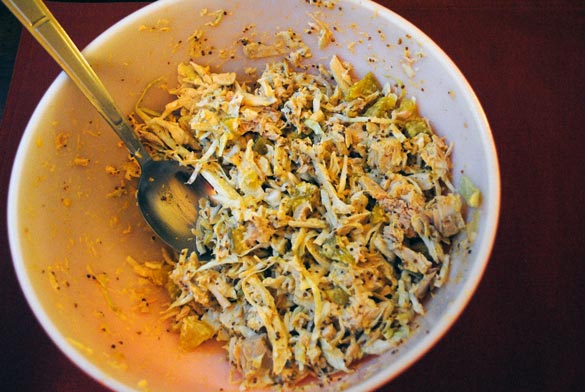 It looked about as pretty as tuna salad can get. (Following the Halloween theme, maybe the tuna salad is like brains or guts or something stringy like that?) 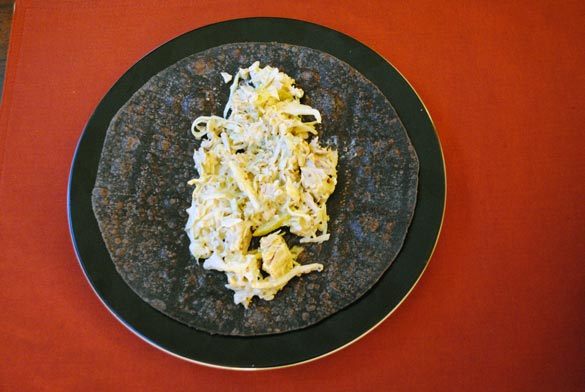 With less stuff on the inside, I had a better time rolling this one up. (Again, I did warm the tortilla in the microwave for a few seconds.) 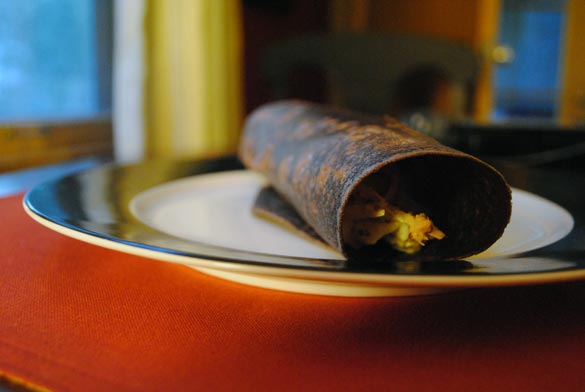 But, it still flaked and broke some. 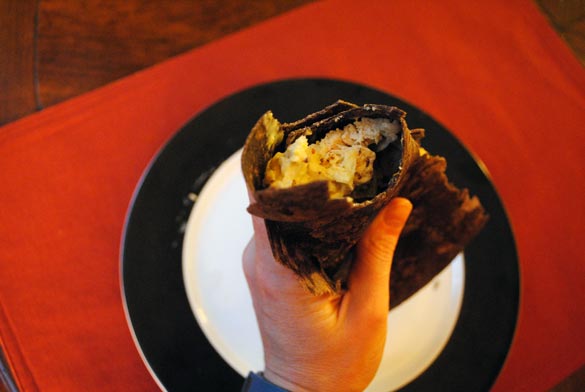 You know, it was okay though. Not sure if it was the pickles or the mayo, but the black rice tortilla tasted awesome with it. So I went ahead and ate it up, tostada style. 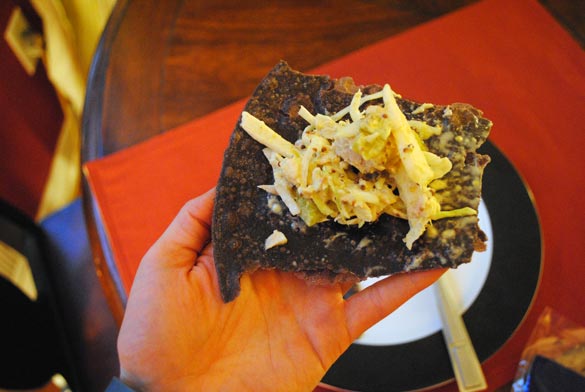 Overall, Food for Life’s Black Rice Tortillas are a fun twist on your usual tortilla. You definitely want to pair them with something and don’t expect them to be as soft and pliable as a normal tortilla, but if you’re looking to up your nutrition or need a gluten-free fix, it’s a good option. Again, definitely more health-food tasting, but I dug it for nights when I wanted more carbs and/or didn’t want to do a lettuce wrap again. And I love how HUGE these are. For 170 calories, it’s a lot of flavor real estate to put your fave goodies on.
Do you eat a lot of tortillas? Ever had black rice? —Jenn