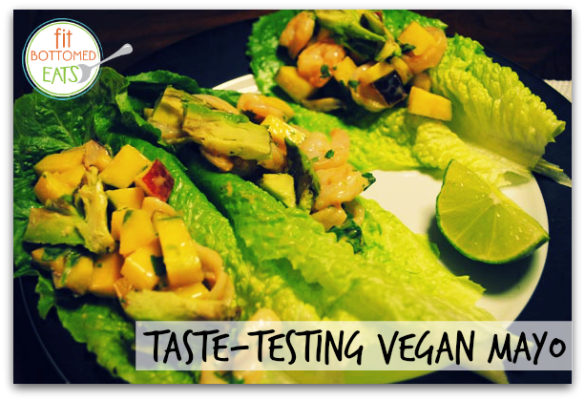 Remember that time I tried cooking beef tongue? Well, this post is very different from that one in that it is all about vegetarian and vegan mayo. And not cow tongue. However, where it is the same is that it doesn’t exactly make for the most, um, appetizing photos. I mean, maybe I’m weird, but I don’t salivate looking at jars of mayo — or even mayo spread out on something delicious. It just seems kind of gross to me. (Am I right or totally off base here? I feel the same way about ketchup.)
Nonetheless, I tried Nayonaise — both the normal sandwich spread and the whipped version. And it was actually kind of fun! And pretty delicious, even though it was pretty weird taste-testing plain mayo. (When do you ever eat mayo plain? I hope never.) 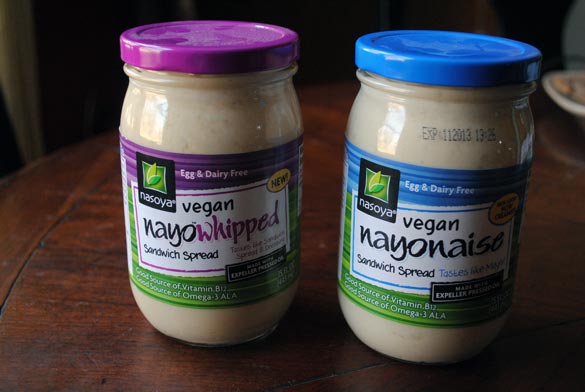 Eggless, vegan, gluten-free and a good source of vitamin B12 that’s made from expeller pressed oil, I was curious in trying Nayonaise. I’ve never had an eggless and vegan form of mayo in my life, and I was curious about it. (Plus, you know, I should overcome my apparent issues about plain mayo, vegan or not. I did it with cow tongue; I can do this!) 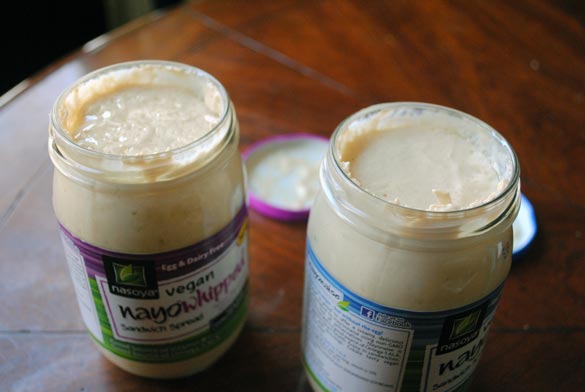 The nutritionals on the Nayonaise were pretty good. The ingredient list is fairly clean and, honestly, not bad for a non-egg product trying to be an egg-filled one. And 40 calories for a serving (with good fat!) is a heck of a lot better than 90 calories for your usual non-vegan full-fat mayo. 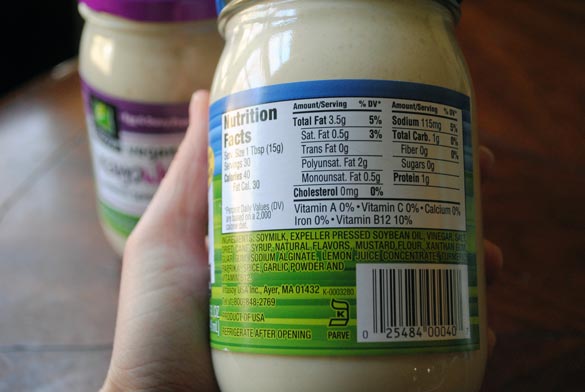 NayoWhipped had similar ingredients and nutritionals. (Note: It does have one gram of sugar, which I’ll comment on here in a bit.) 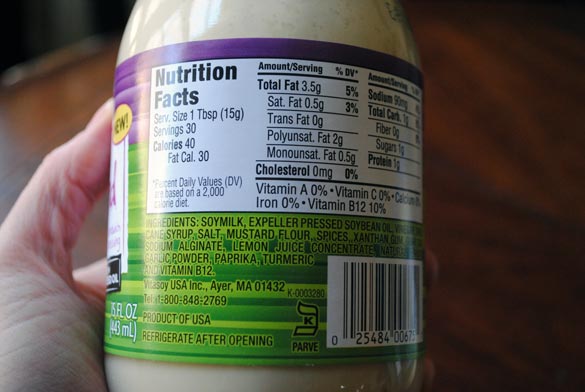 Let’s talk about consistency now. Er … this stuff is kind of like mayo, but also a bit more, well, gloppy. Not exactly a smooth texture right out of the jar for the plain version. 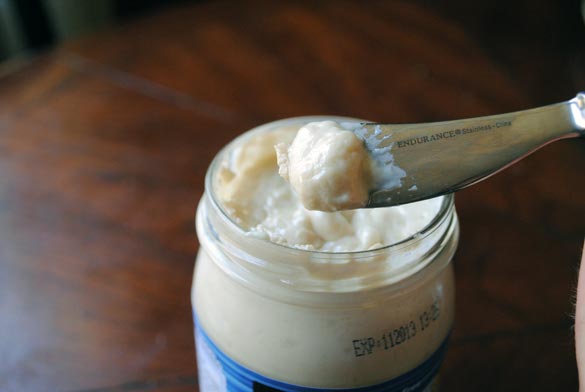 And the whipped version didn’t seem very whipped — there was some oil separation at the top and it had the same gloppy issues. 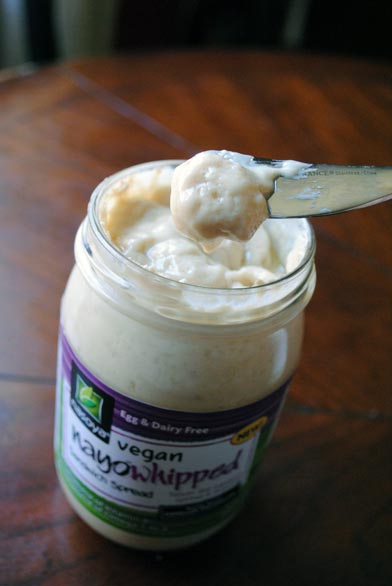 (Isn’t this fun? I’m so happy you’re still reading.)
But, I will say that for a vegan mayo, they both tasted pretty good. A little tangy with some garlic savoriness, they didn’t taste exactly like Miracle Whip, but they had a little something to them that I liked. The regular version was more basic mayo tasting to me, while the NayoWhipped had a slight sweetness (that gram of sugar!) that was really pleasant. I can certainly see how if you were a vegan who missed mayo, this would feed a craving quite nicely.
Because I don’t eat mayo on its own except when taste-testing and working on my personal self-growth, I decided to try both varieties in a dish that I made up from what we had in the fridge: seafood and mango tacos! Kind of like a seafood salad in taco form, I mixed the Nayonaise with a little sriracha and fresh lime juice to coat the seafood (a mix of shrimp, calamari and scallops), mango, red onion and cilantro with.
I was feeling so brave that I did a taste test again — this time of my sauce made with both kinds of Nayonaise! Verdict: They both tasted really good and blended up nice and smooth. No gloppiness! I ended up using the whipped version just because it had a touch more flavor. 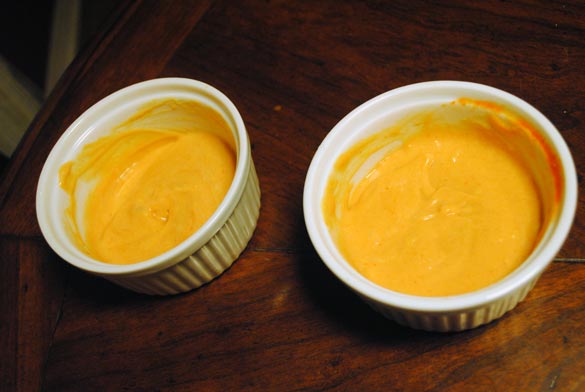 Mixed everything up, put it in corn tortillas and topped it with avocado and a little more fresh lime juice. Boom. Dinner! (And, yes, I know these tacos aren’t vegan in the least — you could easily sub in some grilled tofu or tempeh or white beans though!) 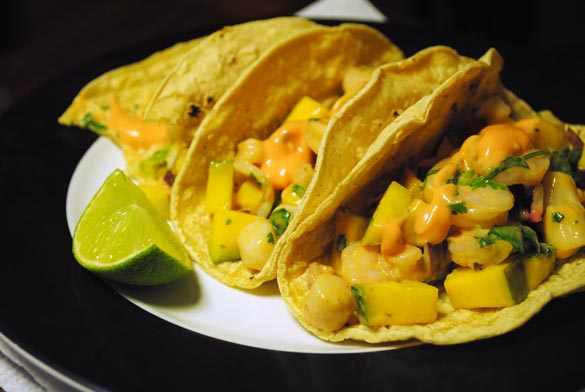 The mixture was even good in lettuce wraps the next day. 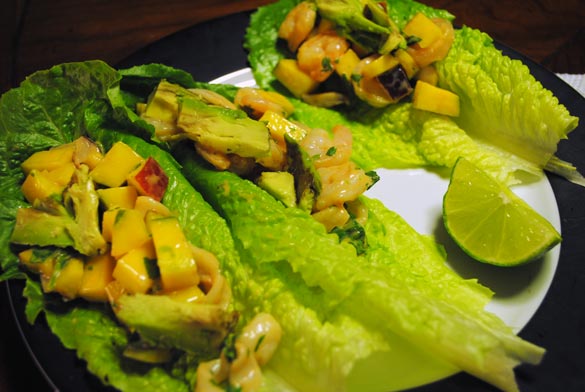 And, honestly, once incorporated in the food (or, I imagine, spread on a sandwich), you couldn’t even tell Nayonaise was anything different than just a fun flavored mayo. Gloppiness gone; flavor good. I’ll totally be using this stuff in more dishes. Mayo fear, begone!
Ever tried a vegan mayo? Have a vegan version of a non-vegan food you love? What is it? —Jenn