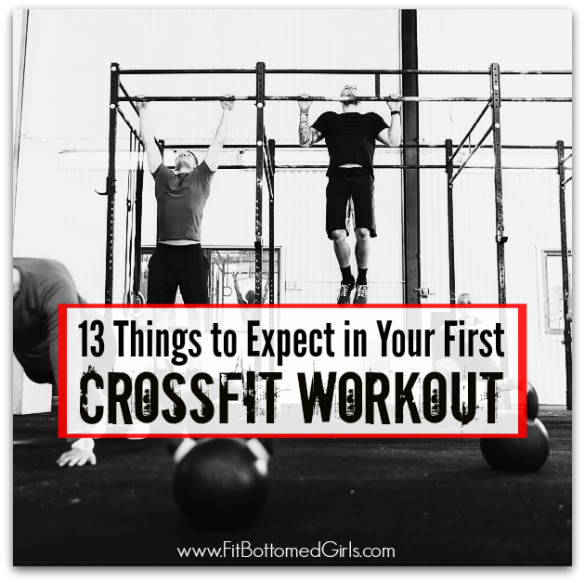 Is there a single workout word that evokes more fear in the heart of newbies and seasoned exercisers alike than CrossFit? The uber-intense workout that involves everything from kettlebells to box jumps to pull-ups to rowing and Olympic lifting has quite the reputation. (Some really good. Some really bad.) While CrossFit isn’t something everyone will dig, for those who dig it, they dig it. Hard.

And, for me, doing CrossFit-style workouts has been pretty life changing. I get why and how people are reluctant to try it. I can see why it’s criticized. But I also get why it’s totally awesome. And why everyone should give it a go at least once or twice (and listen to their bodies along the way, of course). So, if you’ve been thinking of trying a CrossFit workout, but are totally terrified, read on for the 13 things you can expect!

What to Expect in Your First CrossFit Workout

1. It’s going to be hard. This probably goes without saying, but CrossFit workouts are no picnic. It’s not like jumping on the elliptical and doing some intervals. It is all-out effort, and you’ll probably be asked to do things you haven’t done since elementary school.

2. You should talk to a coach. Anyone new to the CrossFit scene should talk to the gym owner or a coach to learn how to best ease into the workouts. There are a lot of complicated moves in CrossFit, and you want to learn how to do them correctly. Like now. Also, modify what you need to and don’t be embarrassed about it. At the end of the day, it’s still YOUR workout.

3. There’s a lot of lingo. From WOD (workout of the day) to AMRAP (as many rounds as possible) to box (the gym), here’s a good guide to understanding the CrossFit lexicon. And don’t worry, after a few WODs, you’ll be using the lingo, too.

4. It’ll be unlike any workout you’ve probably done. Very rarely do you ever do the same WOD. And almost every WOD has its own flavor. It might be a circuit. It might be Tabata. It might be rounds. It might be team work. You just never know. And that’s what makes it great.

5. Most of the time, you’ll be timed or a score or rep/round count will be recorded. Don’t let this freak you out! Once you get the hang of things, this will be fuel for you to go harder and do more than you think you can. For now, don’t focus on anyone else but you. Run your own race.

6. EVERYONE will be there. CrossFit boxes, in my experience, can be a catch-all of everyone from people wanting to lose weight to former college athletes to seniors to teens to women in their 40s who are AMAZING. And there’s usually an even split of men to women, which is refreshing.

7. You’ll see people doing amazing, almost super-hero things. All of those people I just mentioned? Many of them have been doing CrossFit for years, and their hard work has paid off in super-fast times, muscles, six-packs and athleticism that’s just jaw-dropping. Again, don’t compare yourself to that. Instead, be inspired by it.

8. Everyone is going to root for you. CrossFit boxes (the good ones at least!) are known for having a strong and welcoming community. They’ll cheer for you. Give you pointers. And show you the ropes. Be friendly and get to know them — even the intimidating ones with all the muscles. Pretty soon, that same person will be your BFF, and you’ll be cheering them on, too.

9. You might feel like puking. Yeah, it’s true. I told you workouts were intense. Expect to work harder than you ever have. When you feel like you’d rather die than swing that kettlebell one more time, that’s pretty much when you’re doing it right.

10. You’ll be insanely sore the next day. Scratch that. For multiple days. Take the rest you need, eat protein and get good sleep. Get back to it when you can. And know that eventually you won’t be that sore every time. Promise. (But you still will some of the time.)

11. Stick with it, and you might get addicted. The feeling of accomplishment you get after a WOD is awesome. So awesome that you’ll want to do it again and again. You’ll even consider something like 100 burpees … fun. Yes, fun!

12. It’ll change your body — and your life. Besides burning fat, boosting your metabolism and building muscle, CrossFit has a way of showing you that you’re stronger than you ever realized — inside and out.

13. You’ll begin to think that tall socks are cool. And that lingo? You’ll be dropping it on the DAILY. Not to mention making CrossFit puns and WOD jokes. Oh, the jokes.


Alright CrossFitters, what did I forget? And those wanting to try CrossFit … any questions? Feel better about giving your first CrossFit workout a go now? —Jenn