In a lot of ways, I feel like I’ve found my own gluten-free healthy living jam. Gluten and I (and my digestive system) do not go well together (intolerance, not celiac), and I’ve been crafty at recreating my favorite dishes minus the gluten at home (ahem, thank you Pinterest!) and sooo many restaurants are making it easier than ever.

There is one thing that I’m really, really jonesing for that has no gluten-free equivalent. This … oh, dark and heavenly, this. 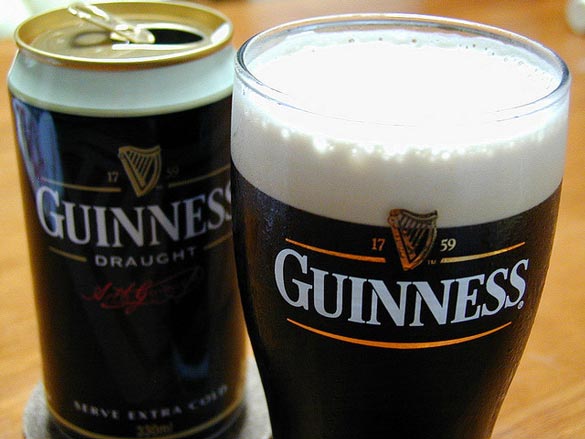 Most gluten-free beers on the market leave much to be desired. And, thus, when I go out, I sip on a lot of wine. And, for the record, I really, really love wine. But on St. Patrick’s Day, it’s not just the corned beef and cabbage I want to have. It’s a big ol’ glass of dark and malty Guinness. And, as far as I know, there’s no gluten-free option that even comes close to capturing that chocolaty creamy and rich taste other than Guinness.

But then, because assumption is the mother of all — well, you know — I Googled if Guinness was gluten-free. I pretty much wrote it off because wheat is a big part of pretty much all beer, but what’s that? Guinness is only make with malted barley, hops, yeast and water? Say wha?!

Yes! There is no official gluten in Guinness. BUT, there is the big caveat that it does contain barley that has a protein called hordein in it that acts similarly to gluten. Although the reaction to hordein is generally much milder than wheat gluten for most people. (That said, if you have celiac; I’d stay away!)

So, you know what, I’m going to go “crazy” and have a sip or two later today. I will see how it affects me, and let you guys know with an update in the comments later. Fingers crossed …

Any gluten-intolerance people tried Guinness with or without success? I’m pumped for my St. Patrick’s Day experiment! —Jenn