Within the last week or two I’ve had some really good conversations with my bud Sheryl and some of the FBGs about “the right to complain.” Or, actually, the right not to complain.

You: Man, I really wish I was better at [workout/exercise].

Friend: Me, too! I really suck at [workout/exercise]. I really wish I could [enter goal]. But, blergh.

But here’s the kicker: You can’t get better at stuff you don’t do. And we tend not to do the stuff we’re not good at. So it’s kind of a catch-22/self-fulfilling fitness prophecy. You think you stink at something, then you don’t want to do it, then you never get better at it because you never — you know — work on it. 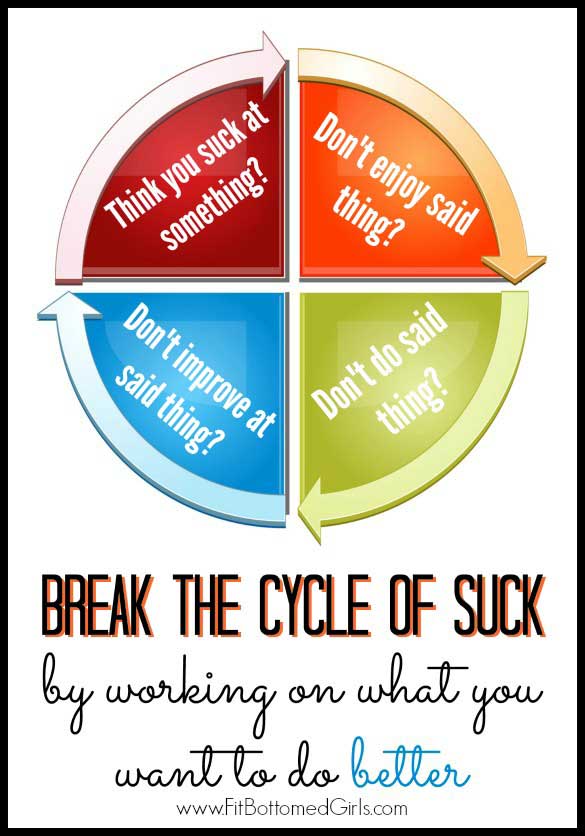 I pretty much spent my 20s in the what I’ll oh-so eloquently call: the cycle of suck. Despite wanting so badly to be a runner, I didn’t do it often, and so I was never great at it and didn’t enjoy it. It wasn’t until I was older that I committed to running regularly and found that although I wasn’t probably genetically destined to be a track star or qualify for Boston, I could run longer distances and actually enjoy it. But it took months and months of work and getting my head right. Same goes with falling in love with burpees.

Now, I get that all of us have natural strengths and weaknesses. And that sometimes we’re just commiserating and bonding with our friends, but I want to pose this question: Do you really have a right to complain about something you’re not good at if you’re not at least working towards being better at it? Could a complaint be a wake-up call to yourself to change things up? Or that you’re unfairly comparing yourself to others? Or — ask yourself honestly — are you really whining about something that you’re not willing to work on?

I know I still do it, without even realizing it, in fact. Just the other day I was complaining about wallball and wishing I could do more without my legs wanting to fall off and my lungs burning up. But am I in the gym really working on those things day after day? Nope. I’m over there doing pull-ups and push-ups because I’m better at those — and complaining about leg work. But no longer! I shall now be more aware of the cycle of suck. And aim to break free! Which means relishing in the hard stuff … and focusing on getting better and stronger.

Do you have the right to complain? Whether it’s about your pant size, a workout or even a skill like playing tennis or cooking? Time to get honest, ladies. Let’s halt the self-fullfilling cycle of suck! —Jenn