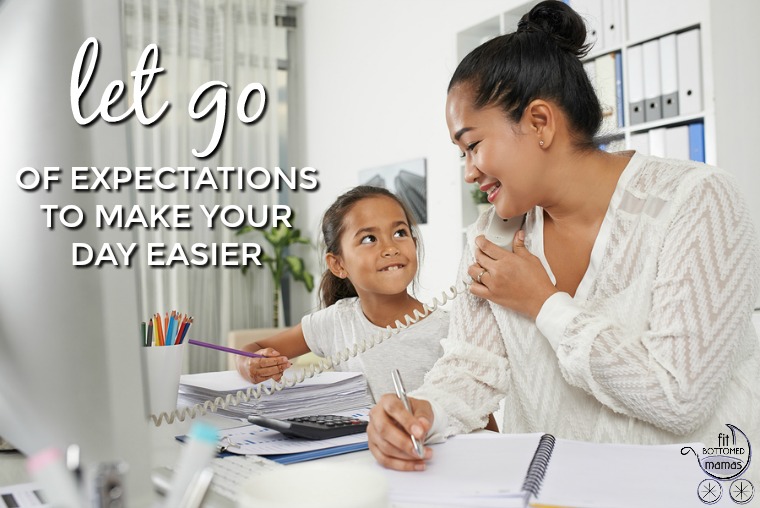 When we let go of expectations, especially when parenting, things can really open up for us. But sometimes I forget about this. A couple weeks ago I had an experience with both my kids in a matter of hours that reminded me of the benefits of letting go of expectations.

I’ve been working on putting together some free trainings to help parents learn to parent the way they want. As I was approaching my self-imposed deadline, I was, predictably, facing stress that was only amplified by my kids. They needed me, wouldn’t let me out of their sight to work, would usually undo whatever chore I had just done, and forget about turning on the computer, opening the laptop or picking up the phone. And during this time, I became intimately aware of what adrenal fatigue is, so I had to quit coffee. Cold turkey.

On top of that, the little one, 18 months, is in a wicked sleep regression and gets up out of her floor bed nearly every night, opens her door (which doesn’t latch), crawls into my room, and ends up in bed with my husband and me. Most nights she nurses and gets back to sleep in a few minutes but that night she tossed and turned for about 3 hours.

Since the baby kept me up all night, I overslept and was late getting into my older daughter’s room to get her started for the day. I tried to convince her that she didn’t need her regular morning cuddle, hugs and stretches before getting dressed so that her dad, who takes her to preschool, could be on time to work. This did not go well. She is very into her routines and was instantly resistant to my requests to skip steps. Usually (even though I’m a parent coach and know better), I try to convince her why I’m right in hopes that it motivates her to get moving. But that particular day, I realized I set an unrealistic expectation of her to skip all the parts of her morning routine that she loves the most.

Of course she wasn’t going to go along with me! When it hit me I set an unrealistic expectation for her, I acknowledged that to myself, released the expectation, was able to give her empathy, and then she got herself moving and out the door within 25 minutes from wake-up to in the car. This is a miracle. Most days it’s 25 minutes just for cuddles.

Since I was feeling really great about how the morning had gotten off to such a smooth start, I set another expectation that her baby sister would let me go about my day as needed. That evening I had a big Facebook Live event scheduled and I still had a lot to do to be ready for it.

For some reason, I thought the baby would let me get work done that day. This was sooo not the case. First of all, she hates it when I’m working and she can’t get in on the action. Second, she has been very clingy lately. And the same thing happened. When I finally admitted I wasn’t going to be able to get any work done until nap time, I decided to move around the house to do chores. And she had to be right there with me, either on my lap or sitting right next to me all morning to stay content. But when I released the expectation that things would go any different for her than they had in the past several weeks before then, she also went along with what I needed. She crawled off to play independently for quite a while and I was actually able to sneak some work in.

So what’s going on here? When we set expectations for how we want or need our children to behave, they’ll resist it. They have their own internal expectations for how they want things to go, and if we ignore it, we face resistance. If we let it go, everything starts going much more smoothly. Even though it wasn’t verbal, my kids picked up on my energy resisting them. When my kids no longer felt that resistance from me, they stopped resisting what I needed, too, and everyone had an easier day because of it!

Have you ever let go of expectations and then been surprised by what happens? —Cati