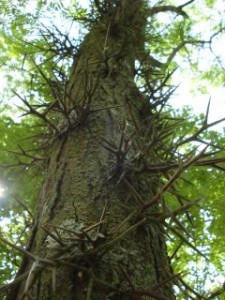 Meet the Honey Locust*, my friends. This bad boy recently taught me a fitness—and life—lesson. Namely, to slow down, appreciate the small things and don’t take your feet for granted.

See, a few weeks ago I went on a benign camping trip. As someone who grew up camping, I was excited for the trip and felt prepared. We had our tent, our s’mores supplies, our beer and our sunscreen (note that we were at a lake only about an hour and 15 minutes from my house and 30 minutes from civilization). Because the park had no hiking trails, I didn’t see the need to wear my heavy duty hiking boots. Instead, I wore Crocs (please don’t tell the fashion police). This was my first mistake. My second mistake was playing bean-bag toss in a wooded area populated by the pictured tree. I’m sure you can see where this is going…

Without going into the gory details (although, if you’re squeamish, you might want to skip the next paragraph), I stepped on a three-inch thorn. It went through my Croc and into the ball of my foot. Ouch. I pulled it out immediately. OUCH. And then my husband tried to get small pieces of the thorn out of my foot as apparently these types of thorns are notorious for leaving behind bark when they’re pulled out. OUCH! Then I sanitized it with hand sanitizer, as it’s all we had on hand. HOLY MOTHER OF OUCH! Two days later, after realizing that there were still pieces left in my foot, I went—and by “went” I mean “gimped” because I could barely walk—to my doctor who numbed my foot and removed the remaining pieces. Again, I won’t go into the icky details, but when I left the doctor, I had a much larger hole in my foot, a prescription for codeine and a bad reputation for cursing like a sailor at the physician’s office. Oh, and a much worsened gimp.

For a full 10 days, I probably needed crutches to get around, but I was too proud to use them. So I hobbled to and fro, limiting all of my walking to the necessities. Need to go to the printer? Nope, not going to happen until I also had to pee, ask a coworker a question and refill my water bottle. I became skilled at batching my activities. Doing simple things, such as going to the pharmacy to pick a second antibiotic prescription after your doctor prescribed you one that made you break out into a rash after warning him that it would and then having to wait extra long because he called the prescription into the WRONG PHARMACY, become really tiring and difficult. (For the record, this was not my regular doctor. My regular doctor was on vacation, and from here forward I will forbid her from ever taking a vacation again.)I also just about went insane from not being able to work out. My regular runs were out of the question, as was anything that put any sort of pressure on my left foot. Because I’m a bit of a cardio junkie, this was a problem. And I got crabby. Very, very crabby.

That is, until I began to see the positives of my predicament. My husband was all of a sudden doing all of the cooking and cleaning without any reminders. I could lie on the couch and watch TV all night and feel good in that I was “recuperating.” And, I had a battle wound to show off. (I did earn it after all.) I also started noticing things around me more, like flowers that were blooming today but not yesterday, and a whole new bookshelf at work. (I’m not kidding.) Cut your normal walking speed in half, and you’ll see what I mean.

Because of my standing restrictions, I also rekindled my love of weight lifting. Before work, my usual runs were replaced with overhead presses, bicep curls and chest presses. I made sure to burn my muscles to fatigue and didn’t rest in between sets to keep my heart rate elevated. I even tried, and liked, a mat Pilates DVD—an exercise phenomenon I’ve never been sweet on.

Now, weeks later, my foot has healed, and I’m back to running. But something has changed. I’m excited to be on the trail and able to run, but I’m also making time for some Pilates moves to strengthen my core, as some of those exercises really freakin’ rock. My “injured” time away has also given me some serious perspective. Namely to slow down, be appreciative and wear the right footwear, especially when within miles of the not-so-sweet Honey Locust. —Jenn

*Note: This tree is not huggable.