When I first embarked on my backpacking journey, I never really thought it would be much of a culinary adventure. I mean, really, how exciting can trail mix get? Turns out, even the freeze-dried food we ate wasn’t all that shabby. Granted, you begin to redefine what “good-tasting” means when you’ve been out on the trail for days, unshowered and generally burning enough calories to make you so hungry that anything tastes like Wolfgang Puck himself made you dinner. Okay, maybe the food wasn’t that good, but it really wasn’t that bad either. Especially considering we were totally out of civilization with just a Jet Boil for cooking. Want proof? I have another photo essay for you! This time on my experience trying to find the best backpacking food! Whee!

My Search for the Best Backpacking Food

First, you start the day with coffee. Of course. And Starbucks Via instant coffee is a freakin’ godsend when you’re camping and backpacking. These little packets are sent from heaven above. Trust. (Oh, and check the cool cup that accordion-folds down into a light, flat piece of plastic. Genius!) 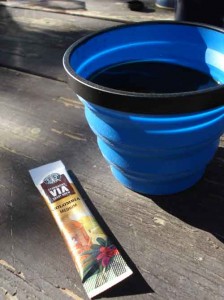 I’ll be the first to admit that our breakfasts weren’t that exciting. Peanut butter and a bagel here, an apple and some nuts there. So let’s move on to something more exciting, like a bland lunch that actually tastes delightfully hearty and delicious when hiking: Tuna in a wheat tortilla! I pretty much ate this dry (no sauce), which sounds pretty terrible, but—again—after five miles carrying a fully loaded pack, it’s pretty much the best food you’ve ever eaten. 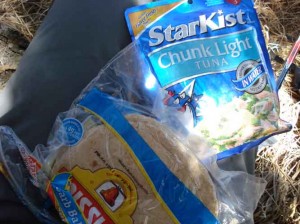 Then there were the snacks. Oh, glorious snacky-snack-snacks. When the belly starts grumbling on the trail you feed it Clif Bars and trail mix. I was a particular fan of the peanut butter Clif variety, and trust me, the combination of almonds and Sun-Maid raisins on the trail is sweet-and-savory perfection. Beef jerky is a good choice, too, for protein. (My husband was also obsessed with it. Must be a guy thing.) It’s all about eating foods that don’t spoil, don’t weigh a lot and pack good nutrition in each bite. 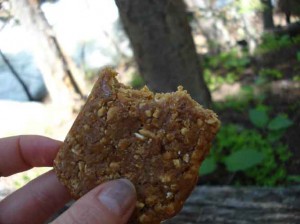 Now,  let’s talk dinner. Dinner was by far the most elaborate meal of the night. And by “elaborate,” I mean that we busted out the sporks and bowls. The first night we had a lovely freeze-dried meal of lasagna with meat sauce. The second night? Beef stew. The third night we chowed down red beans and rice, and the final night in the Rockies we had our most foodie-sounding freeze-dried meal of all: Pesto Salmon Pasta. Oddly enough, the most delicious of all of our space-agey culinary creations was the lasagna. I really thought the lasagna would have been the worst of the bunch, but alas, my freeze-dried food radar is a bit rusty. It really is amazing how you can just add boiling water to these freeze-dried food packs, zip them shut and get a pretty tasty meal within just a few minutes. 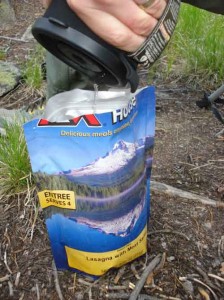 See? It really doesn’t look too shabby just sitting there on my legs and all. Tables really are just a luxury. 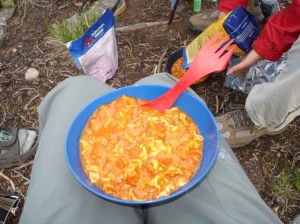 Guys, we even had dessert. This freeze-dried Blueberry Cheesecake was dang good. Filter some water, add it to the cheesecake mix to rehydrate it into creamy goodness, then top it with blueberries and crumbly graham-cracking topping, and you are good to go. Hooray for carb loading. 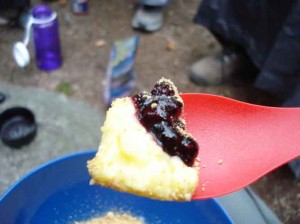 And it just wouldn’t be a vacation without a little imbibing. So for that, the boys on the trip packed this delicious canned beer from Oskar Blues. They made sure to—of course—pack out the empty cans that we all shared. 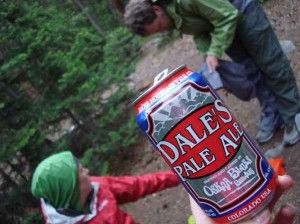 But two cans of beer just wasn’t quite enough for all of us, so I brought along an extra beverage, just in case. I’m pretty certain that CalNaturale’s Cabernet Sauvignon was made to be drunk in the mountains. A fine table wine (um, minus the table), it’s packaged in a light, resealable Tetra Pak, making it perfect for hiking and camping. (I love how my fellow campers are obviously doing something important in the background while I’m standing there taking photos, being totally unhelpful. Sorry, guys! I also, apparently love taking shots of drinks at an angle…) 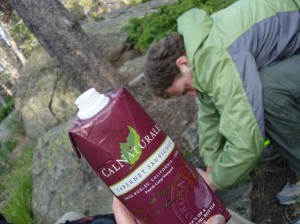 And then there’s the mother of all meals: The first “real” meal you have after coming off the trail. Sure, we hadn’t showered in six days, but public be damned! We were hungry like the wolf, and had all been dreaming of IPA and pizza. Of which we all stuffed ourselves. Village Pizza in Estes Park, Co., I’m sorry about the stench. 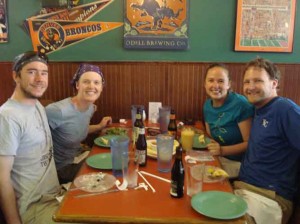 Now just look at those happy, stinky, well-fed campers! We were seriously giddy over the access to glasses with ice, a flushing toilet and water that you didn’t have to pump and filter. Most people go on a vacation to get pampered, I apparently like to do the opposite. Get down to the basics, see some nature and come back totally appreciative of all the little things you take for granted every day. It’s not exactly a relaxing vacation and the food is memorable for all the wrong reasons, but I really, really enjoyed it. Especially that lasagna—and the wine. Truly delicious memories. —Jenn