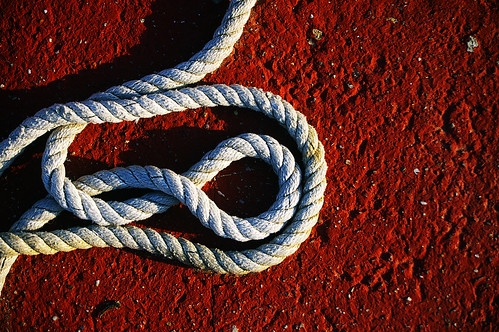 Watch out for the rope burn! Credit: visualpanic

I want to say it was back in third or fourth grade when I first encountered “the rope.” I say, “the rope,” because it scared the bejesus out of me. Hung what felt like four stories above our little heads (in reality, I’m sure it was one), I remember our P.E. teacher commanding us to climb the rope. So, one at a time, boys and girls alike gave that darn thing their all. Most of the boys scurried right up it, like monkeys. The athletic girls who played sports gave it a solid effort, making it at least halfway up. The other girls who weren’t athletic either feigned sickness or gave it a half-hearted attempt, pretty much giving up before even trying.

When it was finally my turn, I was freaking out. While I’ve never been super afraid of heights, I’ve also never been the girl who wanted to bungee-jump or peer over the edge of a tall building just for the heck of it. So not only did the height make me feel a little woozy, but the whole freakin’ class was watching. At this age, I was shy, lacking confidence and generally awkward. I definitely didn’t like the attention of the class, especially when physical feats were involved. While I wasn’t the least coordinated in the class by far, I didn’t feel strong or really good at anything, except reading and writing. (Oh, how I wish I could talk to that little girl now.) Rope climbing in front of boys was definitely outside of my comfort zone.

I remember standing at the bottom of the rope, completely unsure of what to do. Already embarrassed from the attention and with absolutely no instruction from my P.E. teacher on how to properly climb a rope, I tried my best to make a go of it. (In the back of my head, I thought that maybe I could climb it to the top, slide down in super-cool fashion, garnering applause from all my classmates and attention from the cutest boy all the girls wanted—you know, like what would happen on “Saved by the Bell.”) Alas, I relied on only my weak upper body to pull me up and got nowhere, fast. I think I made it a foot up. And then I got a rope burn somehow.

No applause. No attention from the cute boy. Just me, feeling weak.

I’m sure no one in class thought twice about it. I was just another girl who couldn’t climb the rope. But to me, I felt defeat. I hadn’t thought I could do it, but in that moment it hammered home that I actually was weak. Inferior, even…I was a girl.

That experience stuck with me longer than I’d like to admit, as I discounted myself from doing a number of activities as I got older in school—running, other sports, even wanting to fully participate in P.E. class. It wasn’t until college, when I found group exercise, that I finally figured out that being a girl doesn’t mean you have to be weak. (Hooray for weight lifting!)

But still…I had no desire to climb a rope. Been there, failed that. Until one day when I walked into this place. And the rope was there as part of the workout, hanging from the ceiling like a big ol’ two-story-tall middle finger. At first, I freaked. “Oh, God. It’ll be just like last time,” I thought. And then, I realized, it was my chance to undo that stupid-ass memory that taught me everything that I wasn’t and nothing that I was physically.

After a quick lesson on how to climb it (USE YOUR LEGS!), I started climbing. As I began going up, I was all “I’m climbing a rope, ya’ll!!!” in my head, and then, once I reached the halfway point, I was all “Holy S*%tballs, this is high up.” And I came down, and got a rope burn. And then I did that four more times.

While I never reached the top of the rope that day, I climbed that mo-fo and was proud of my rope burn. I climbed it out of fear, anger of the past and with the confidence that I’m not weak—nor am I embarrassed or afraid to be me. The next time that rope makes an appearance at The Fit Pit, I feel confident that I’m going to the top. Goodbye, grade school. Hello, life. —Jenn