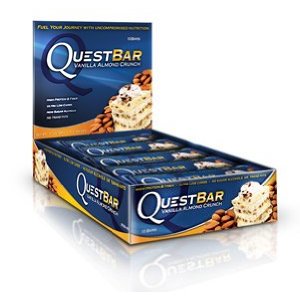 Well, it looks like I’ll be adding to our best protein bars list…’cause, guys, I just tried Quest Bars, and let’s just say that amidst the overcrowded waters of protein bars, they stand out. While not all of the flavors were my fave, a few standouts rocked my protein-bar-lovin’ world.

Before we get to the flavor-flaves though, let’s talk nutrition. (Because, seriously, anyone can make a protein bar that tastes like a candy bar, but can they do it with nutritionals that actually beat a candy bar? I think not.) With 200 to 210 calories a bar depending on your flavor of choice, these aren’t low calorie but they do make for a great post-workout snack when you’ve hit the gym really hard. They also work super well before a morning workout, when you eat half before and half after. And with a whopping 20 grams of protein (mostly whey for you protein-junkies out there) and 15 grams of fiber (yes, you read that right), these Quest nutrition bars are also made without gluten, sugar alcohols and an ingredient list long enough to make your eyes cross.

Sweetened with sucralose, they’re sweet but not too sweet, and while they do have that slight Splenda-esque aftertaste, it’s pretty minor. These Quest nutrition bars come in a variety of flavors, too: Peanut Butter, Vanilla Almond, Mixed Berry Bliss, Chocolate Brownie and Apple Pie. While none of the flavors were terrible, I found—rather surprisingly since they’re usually my favorite flavors—Peanut Butter and Chocolate Brownie to be the least tasty. Mixed Berry Bliss was pretty good, and Apple Pie tasted like real honest-to-goodness apples. (When’s the last time you could say that about a protein bar that wasn’t a Larabar?) The Vanilla Almond Quest Bar though was hands down the best of the bunch. It was like a vanilla sundae with almonds sprinkled in, but totally filling and full of protein. So good and totally unique for a protein bar.

While no protein bar is ever as good as a real snack or meal of fruits, veggies, healthy fat and protein, in a pinch and on-the-go, these bars help put an end to the “Quest” for finding the best protein bars out there. Quest…get it? Oh, protein-bar humor.