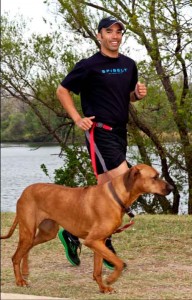 This is obviously not me. But it does work this way!

My dog is about the best running partner a gal could have. Sure, she may chase after squirrels, occasionally trip me to get a better look at another dog passing by us and generally want to stop and pee at the most inopportune times, but I love her. Siena always wants to run, and is so darn enthusiastic to get out  there that it kind of rubs off. (That’s totally worth a leash burn here and there, in my opinion.) But when SPIbelt sent us its new SPIleash to try, I was excited to take my runs with Siena to the next hands-free level.

SPIbelt has long been supplying runners and active peeps with—for lack of a better term—modern fanny packs that are more fit than grandma. I know tons of runners who wear them on long runs and during races to store their cell phones, IDs, energy gels, water and just about any must-have they jog with. The SPIleash is built on this same idea. You clip what’s essentially a SPIbelt around your waist, but it has an extension to clip your dog on to, thereby letting you run with your dog totally hands free.

I was skeptical of this at first. Not because of the product…but because of my dog. I usually run with my dog wearing a Gentle Leader because of all of the reasons mentioned in the first paragraph. So I was nervous to hit the running trail with Siena actually attached to my midsection. But, alas, she was pretty good both when running and walking. Yes, she still lunged after squirrels, and I got to wince in discomfort a few times, but on the whole, it wasn’t bad. And I’m not sure if it was because of the set-up of the hands-free leash or what, but it’s almost like we became a running team, and she better followed me as a pack leader. (Not to get all Dog Whisperer on ya.)

But wait, there’s more! The SPIleash pouch is the perfect size to hold not only running goodies but doggie goodies as well: dog bribery (treats), toys, waste bags. As someone who is used to running with a leash, my iPod and a heart-rate monitor, I have to say it’s nice to lose the leash. It’s one less thing to carry and one less cord to get twisted. And it just feels kind of bad-ass to be running with your dog without physically holding her. (Look Ma! No hands!)

Obviously I can’t confirm that your dog will do the same (every dog is different!), but if you have a mildly sane and behaved dog whom you run with, I’d recommend this. If your dog is your best workout friend like mine is, the $29.95 is totally worth it. —Jenn