Okay, so maybe I didn’t win a date with Bob Harper, but I did get the opportunity to attend his dope-a-licious party he threw in L.A. to celebrate making it on the cover of Men’s Fitness magazine (yes, THIS party!). Meeting that fella in person is one of my (and FBG Jenn’s!) greater FBG moments for sure.

The man entered the room and out came the smiles, back-pats and sincere hugs. People loved him (totally expected when you’re the host of the party with the delicious tequila cocktail smartly named after you), but even my boyfriend and our friends who joined me fell in love. His workout endorphins are magical, I say. In a city full of not-so-nice celebrity, he was a gem. He took time out of his fabulous party to answer some questions. And, y’all, the minute I introduced myself as a Fit Bottomed Girl, he screamed to those around him that he loves us and said that he was one, too. I about peed my pants. Seriously.

Interview with Bob Harper (the CrossFit Beast), Man of the Hour

FBG: What was your reaction when you found out they wanted you for the cover?

BH: I love FRAN, which consists of thrusters and pull-ups; 21, then 15, then nine reps.

(Um, did he say thrusters?! I love pelvic thrusts…he might just need be my workout twinkie!)

FBG: I hear you’ve gotten Ellen and Portia on the CrossFit kick. Were you responsible for Ellen’s amazing push-up contest with the First Lady?

BH: I wish I could take credit for that, but that was all Ellen! Her and Portia are in such great shape. I just worked out with them actually! Those two are good sports when it comes to trying new things. We did some CrossFit together and had a blast.

FBG: You’re eating meat again? Was that a hard transition at all?

BH: No, actually it wasn’t! I was lucky enough to be in New Zealand at the time. Everyone kept telling me I had to try FergBurger. The kiwis weren’t lying! It was so delicious.

FBG: Jenn INSISTED that I ask you about The Biggest Loser. Do you miss Jillian? Is there any truth to the rivalry with Dolvett or are the cameras playing the drama up between y’all?

BH: Jillian is one of my best friends. I love her! I miss her being on the show a lot. As for Dolvett, we’re fine. Can’t a guy just have a bad day?! (LOL.) The cameras totally play up that drama, I swear. Plus Dolvett’s a big boy. He can take care of himself. You have to have thick skin in this business afterall. 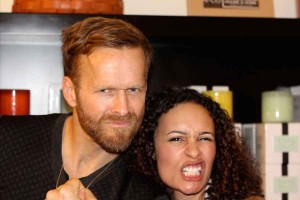 It was unfortunately cut off, but I’m totally squeezing his bicep. Growl. 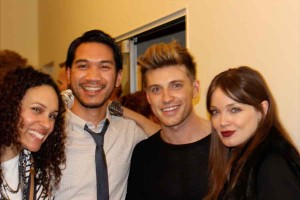 My groupie moment: I saw Jeremiah from The Rachel Zoe Project and about peed my pants! 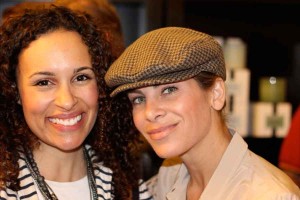 Of course Jillian made it to the party! She was super nice and super excited about some new projects she has coming out. Be on the lookout!

Jenn and Erin have always been on the Bob wagon. I’ve met him twice now, and each time he’s been super-duper nice, dreamy and fun so I guess I’m on the wagon, too. Who wouldn’t want a fitness fella like that around?!  My boyfriend has this ongoing competition with Bob (that Bob knows nothing about), so he’s thinking we ought to try CrossFit now just so he can keep up with the man.

“Fran” sounds like a terrifying challenge that’s about to pop into my future. I want to thank Bob for that…and also thank him for chatting with me! Have you ever met one of your idols? Was it as awesome?! —Tish