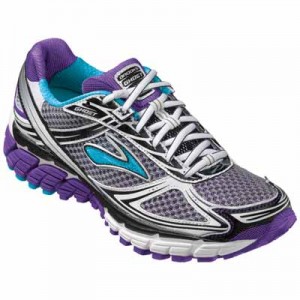 Since the beginning of the year, I’ve really been running in more minimalist shoes. Not fully on the barefoot-running trend yet, I’ve gotten used to light shoes that are flexible and really adapt to whatever it is I’m doing, whether that’s a longer run or sprints or even a CrossFit workout after I hit the trail for a jog. So, I was a bit skeptical about going back to traditional running shoes. But the Brooks Running Ghost 5—the first and only pair of Brooks I’ve ever actually had my tootsies in—proved me wrong. Pretty dang light compared to my older pairs of running shoes, these felt goood on.

I have a neutral footstrike, and this shoe is for strikers like me. With Brooks’ DNA cushioning (this was the cool exhibit I showed in the photos in yesterday’s post) you get both support and cushioning that you can really feel. The midsole is also more flexible than most running shoes with “Omega Flex Grooves” and a “Caterpillar Crash Pad” that helps give you a really smooth heel-to-toe transition. Of all the shoes I’ve ever run in, I would say that these are the ones that make me feel the most supported and the most fluid—I may not be as fast as a Kenyan or look like a Keyan when I run, but I kind of feel like one in these. For $110, if you’re a regular runner with a neutral footstrike, they are worth every penny. Oh, and they come in fun colors. Bonus.

Stay tuned for next week when Tish shares her review of fun new Brooks Running pieces she tried, too! And, tell us, do you have a favorite Brooks Running short, tank or shoe?—Jenn