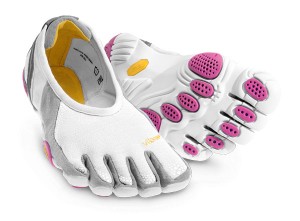 Would you wear these shoes for an indoor workout? I would. Heck, I did! And will continue to! Credit: Vibram FiveFingers

We all know not to bring up topics like religion and politics in polite company; topics like those tend to get pretty heated—and fast. But among runners, the barefoot-running debate has passionate people on either side. Vibram FiveFingers has been one of the leaders of the natural-running movement, championing the fact that running in shoes that mimic the motion of running barefoot allows the foot and body to move and align naturally, improving balance, agility and posture.

(For the record, I’m not here to get on one side of the debate or the other. I see the merit of both sides; I appreciate that Vibram FiveFingers has statements on its site explaining that this is a very different way of running and should be entered into slowly. I also believe that, as with many training tools, shoes that mimic barefoot running are not for everyone. Y’all are welcome to have at it in the comments, but just know that I’m not taking sides; I’m simply offering you a product review.)

Since I’ve been a fan of the minimalist running shoe for a while, I was all over it when Vibram contacted us about reviewing a couple of its barefoot shoes. And I was somewhat surprised to learn that there were so many variations of barefoot shoes offered; they have styles designed specifically for trail running, cold-weather sports, speed workouts, long-distance running, indoor workouts and more. I opted to try the Jaya (for indoor workouts requiring agility, strength, and balance—$85) and Bikila (distance road running—$90).

These (pictured above) are super duper light; almost like wearing socks, but with tread. I was nerdily fascinated with how different movements felt, well, different in these. When doing activities like jumping, doing mountain climbers or making quick side to side movements, it didn’t feel at all like I was wearing regular shoes, but it felt different than it would if I were truly barefoot, too. I was much more conscious of how I used my toes for balance and agility than I ever have been before, probably because they’re spaced out more than they are in any other footwear.

Overall, I really dig them. I was so glad, though, that Vibram FiveFingers included a note in the box saying that I should work my way up to longer workouts in them, though, because after a moderate 30-minute workout, boy, were my calves feeling the burn. And they continued to for a couple of days, so, you know, take that warning seriously! 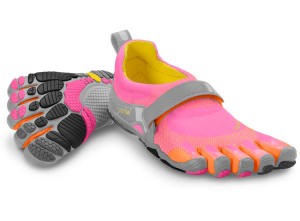 As it turns out, the warning to work my way up to a longer run was even more important with the Bikila shoe. I started out at just an easy mile, then switched to my other shoes to finish a run. I ever so slowly built my mileage up a bit, and like with the Jaya, I was constantly amazed at how different my motion felt. And “felt” is the operative word there. The Bikila has a thick enough sole to keep me from feeling too much in the way of small rocks or bumps in the road, but I still felt a lot more with my feet than I ever have before in even my most minimalist running shoes.

At the risk of sounding too hippity dippity, it gave me a little deeper connection to my run; I focused more on the feeling of my body going through the motions than on the music that was playing or anything else that was trying to make its way into my brain.

The one problem I ran into was a bit of rubbing on my pinky toe, but I suspect this is because, well, my pinky toe is a little deformed and naturally tries to piggyback on the toe next to it, so having something preventing it from doing so while running was a little tough. But, a solid slathering of Body Glide seemed to keep it from being an issue, at least for runs up to a 5K. I’m still working on building the mileage beyond that, and I’m not sure I’ll ever be someone who runs major distances in a barefoot shoe, but I’ve thoroughly enjoyed mixing up my routine with the Bikila.

Have you ever tried barefoot running or fitness in a shoe like one of the Vibram FiveFingers? Why or why not? (And yes, I know that question is totally stirring the pot.) —Kristen