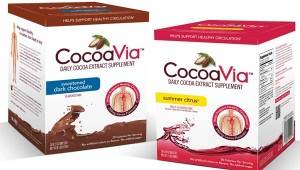 When we first had the chance to try CocoaVia, I was kind of on the fence. I mean, of all of the healthy foods out there, chocolate is probably one of them that I don’t need more of in my diet. But, like any legit chocoholic, I agreed to try these little packets of cocoa-flavanol goodness.

With exactly 250 milligrams of cocoa flavanols in each packet, you can mix any of the four flavors—Dark Chocolate Sweetened and Unsweetened, Cran-Raspberry and Summer Citrus—in your smoothie, coffee, tea, oatmeal, yogurt or juice. While the sweetened packets do contain sucralose (AKA Splenda), they have no added sugar, artificial colors, flavors or preservatives, and all have about 30 calories per single-packet serving. This daily cocoa extract supplement  is purported to help support cardiovascular health by boosting circulation and blood flow, which may help with workouts. (It’s processed differently than regular cocoa powder so it’s said to have more healthy perks than the stuff you bake with.)

I decided to put CocoaVia to the test by first mixing the Unsweetened Dark Chocolate flavor in my morning coffee. As we already know, I like bitter things, and dark chocolate and black coffee are two of the bitter things I love most (hoppy beers would come third). So the combination of these things together? Magic. It made my morning cup of Joe, even more satisfying than usual—not sweet, just rich and chocolaty. And while my usual cup of coffee (oh, how I love caffeine) usually makes me feel good, the addition of CocoaVia made me feel even better. I felt energized, alert and super satisfied. I didn’t notice a huge different in my workout, but it certainly didn’t hurt it. And it mixed in surprisingly well, without too many granules left at the bottom of my mug.

Next, because the unsweetened version was so good, I tried the Sweetened Dark Chocolate. Obviously, it was more sweet than the unsweetened version, but it wasn’t overly sweet. It had a bit of a Splenda-esque after-taste, but it wasn’t terrible. Still though, I far preferred the unsweetened version. (Full disclosure: Things being “too sweet” is a major hang-up for me.) Now for those people who don’t like chocolate (I don’t get you, but that’s okay) but want the benefits, there’s also the fruity CocoaVia flavors. I tried the Cran-Raspberry and the Summer Citrus in water and they were fruity and not chocolaty in the least. Pretty much tasted like a Crystal Light packet mixed with water, and you can easily play with how sweet they are by adding more or less water. I preferred the fruity flavors pretty watered down, but you’re probably not surprised by that.

So if you’re looking for a way to put more cocoa in your life, this might be it! At about $1 a packet, it’s not exactly cheap, but it’s a heck of a way to take your cup of coffee to the next level.

Have you ever tried CocoaVia? Did you have a favorite flavor? —Jenn