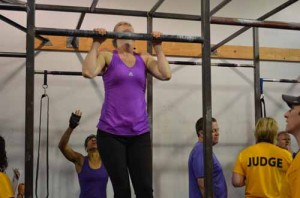 Slowly but surely, getting that chin OVER the bar with pull-ups!

At the beginning of the year, each FBG shared her healthy goals for 2012. With a new New Year sneaking up on us, we thought it only fair to see how those previously set goals were going for us in this Question of the Week! After all, goals only work if you measure ’em!

Last year I set five doable yet challenging goals for 2012. And, on the whole, I’m pretty pleased with myself (especially since—I’ll admit—many of these have been stuck in the back of my mind for weeks, okay, months now!). But let’s take a look at it one by one, shall we?

Goal #1: Clean up my diet a touch more. I am happy to report that so far this year, I have, in fact, been “paleo/gluten-free/and dairy-free about 80 percent of the time” as I wished. In fact, I took Paleo to the next level last May by doing a 30-day Paleo challenge that convinced me that, yes, I feel better when I eat that way. These days, I’m about 90 percent Paleo, hearkening to FBG’s all-good-things-in-moderation way of life. For me, it just works!

Goal #2: Stretch three times a week. Ahem, I already confessed that I’m terrible at this one. So I’m going to go with goal about 50 percent met. I do foam roll almost every time I run, which is two to three times a week. And, I try to fit in a yoga class. But is “stretching” a goal that’s really on my radar? Er, not exactly. I foam roll to avoid injury and I like yoga best because of the mind/body benefits, so I still have a ways to go on this one. This is a good reminder to kick things up for these final two months of the year though!

Goal #3: Flow with life more often than not. I’ve definitely gotten in the flow when it comes to eating and workouts. In fact, I’m big into intuitive exercise these days and really listening to what my body needs versus what I think it needs. And I’ve also played around with my work schedule quite a bit. But do I still work too much too often and push myself to do too much in too little time? Definitely. Hey, we’re all works in progress! But I do think I’ve made serious progress on this one.

Goal#4: Do 10 pull-ups in a row. Dude, I am so psyched about this one! After taking off a few months at the Fit Pit due to travel, over-training and to hopefully help with this, my progress did backslide quite a bit on reaching 10 pull-ups in a row, but as of last week, I could bang out seven in a row, and earlier this summer I did Murphy (100 pull-ups in total!)—all as the real pull-up deal. My hands suffered, but man was I proud. I totally think I can hit 10 in a row by the end of the year without much trouble (or torn hands)!

Goal #5: Make fewer goals. This one still cracks me up, but I’m happy to report that I have succeeded. Sure, I have a goal for my upcoming 5K (will share details in my post on Monday!), but it’s a reachable one, and not one that I won’t throw out if it stops being fun. In 2012, I’ve definitely slowed down to enjoy the now. And it’s paid back ten-fold.

Did you set any healthy goals for 2012? How did you do with them? —Jenn