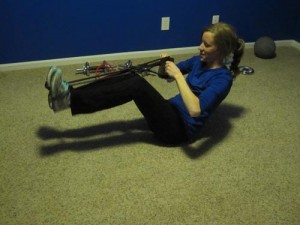 After finishing P90X2 last year, contributing writer Kelsey was up for a new challenge: TurboFire! Follow her progress as she goes through this super popular program by Chalene Johnson. Today’s post looks at how the second phase of Turbo Fire is going. In case you missed it, check out her first month’s recap here!

Well, I made it through phase two of Turbo Fire. I did a little better this time keeping up with the program. I did my best to motivate myself to work out at least four days a week—sometimes more—but four days was my goal (especially with the holidays and other to-dos on my list). There were weeks I accomplished this and others I fell short just a bit. But I will give mucho credit to my workout buddy Laura for helping me through this phase. We worked well together—doing this got her out of her apartment and I got to working out. Workout buddies are the best!

Like the previous phase, this one was a lot about the steady state cardio rather than the HIIT workouts of the first phase. The workouts were longer—mostly 40 to 50 minutes and some were even an hour long, which were hard to squeeze in and complete, but we got through them. There was little variety with this phase and it seemed we repeated many workouts. And for us gals who like to see some variety in our workouts, it made it a harder to get through day after day.

During this phase, we both noticed how much harder it was to follow the routines and how fast Chalene moves during the workouts. Or as Laura put it, “an Energizer Bunny feel.” That’s definitely one frustrating aspect about this workout program: how difficult it is to keep up with the workout AND feel like you are ACTUALLY accomplishing something. Most of the time you feel like you are trying to figure out the moves and get them correct rather than concentrating on the actual workout. I thought P90X2 did a much better job of explaining the moves and moving at a more sane pace in order to get your heart rate up but not at the expense of form or completing the exercise with a full range of motion. 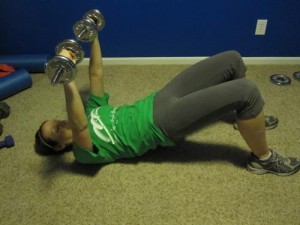 Kelsey doing a move from the Burn Circuit routine—lifting weights and hips at the same time.

As for a measurement update, Bernadette was a little busy finishing her Master’s Degree, so she was less involved in this phase. Congrats to her! I, on the other hand, didn’t notice much of a change with the measurements themselves, but I have noticed more toning of my muscles and a pound or two going away. My jeans fit a bit better this time around. (Yay!) I think I’ve realized that it takes a little more work to change those measurements…

One good thing that came out of the second phase is that we all discovered a workout on one of the discs that we hadn’t noticed before called Burn Circuit. It was a low-weight workout that was a different way to work our muscles—sort of like low-key P90X, if you will. We were all definitely sore after that one. Ouch! But we decided that we all liked it enough to incorporate it in the third phase wherever we felt like we could. We were all pretty excited about this bonus workout that was a change of pace from the regular routine. Wish we had found it sooner…but better late than never!

Overall, this phase was a decent one. I think the other girls were less excited about it, but they tried to keep up as much as time allowed. We will all plow through the third phase, which I think will satisfy our short attention span for workouts with more variety. I also think the Burn Circuit workout will be a big help in spicing things up, too!

Wish us luck as we head into this third and final phase of Turbo Fire! Any words of wisdom? And has anyone else ever tried to customize their own workout through a structured workout DVD program?  —Kelsey