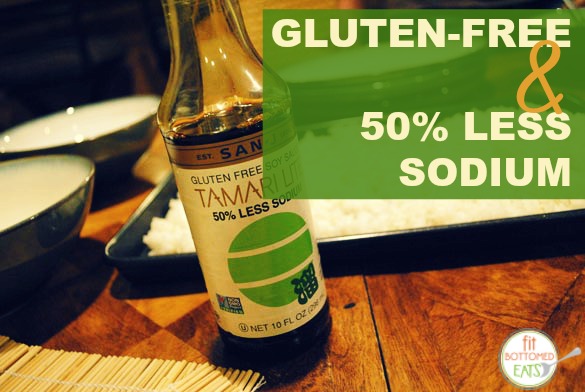 I love Asian flavors — fish sauce, soy sauce, hoisin, sriracha … it’s all delicious to me. But since I’ve gone gluten-free, Asian cooking has become a little more troublesome as a lot of sauces have wheat in them (not to mention MSG and loads of sodium), making them no bueno for my digestive tract. So when we were sent a couple of bottles of San-J’s Tamari Lite to try — a gluten-free soy sauce with 50 percent less sodium — I was so ready to get in the kitchen and get to cooking some Asian eats for Around the World Week! 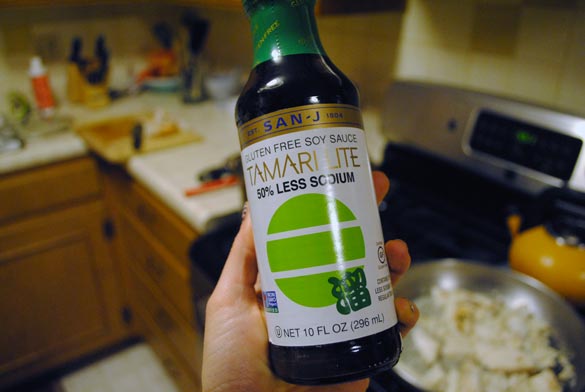 For the past few months I’ve been using Coconut Aminos as soy sauce (which, for the record is awesome), but I was ready to try something new. Made from 100 percent soybeans, Tamari Lite is certified gluten-free, kosher, vegan and is made from non-genetically modified soybeans (Non-GMO Project verified). 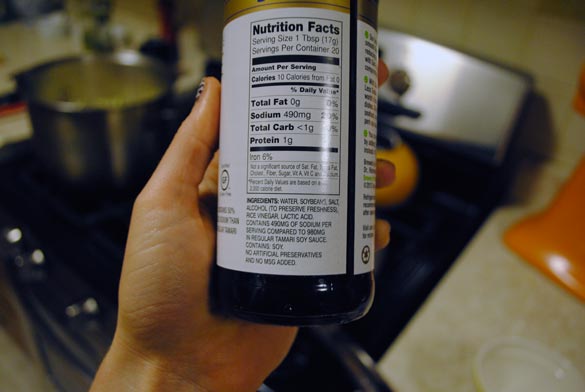 Unlike some other brands of soy sauce, I found Tamari Lite to be a bit more subtle and more complicated than your usual soy sauce. Salty and a little nutty, it has a rich deep flavor. (Apparently it takes San-J up to six months from bean to bottle, and they make it in a small-batch process.) San-J Tamari Lite can be used in stir-fry, rice or noodle dishes, as a flavor enhancer in soups and sauces, and as a marinade or a condiment, which is pretty much exactly all of the ways I decided to test it.
My first experiment was combining it with a little peanut butter, ginger, garlic and lime juice as a sauce on my latest dinner creation: fish “tacos” in a bowl! 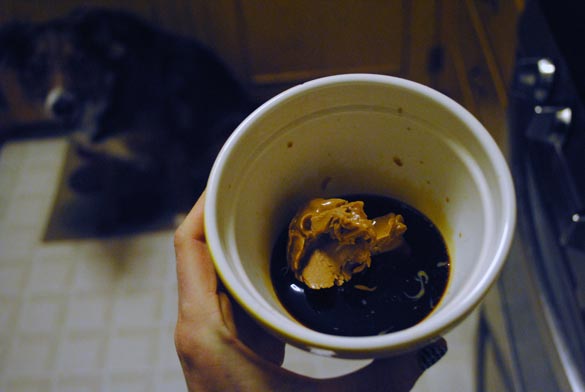 I basically mix the sauce and then pour it on shredded cabbage and chopped red peppers, which I then saute and top with broiled white fish and roasted peanuts. The results? DELICIOUS. Although next time I think I need to go heavier on the Tamari Lite. (Confession: Sometimes when I get new things I like, I hoard them a bit, trying to use as little as possible so that I have more for later.) 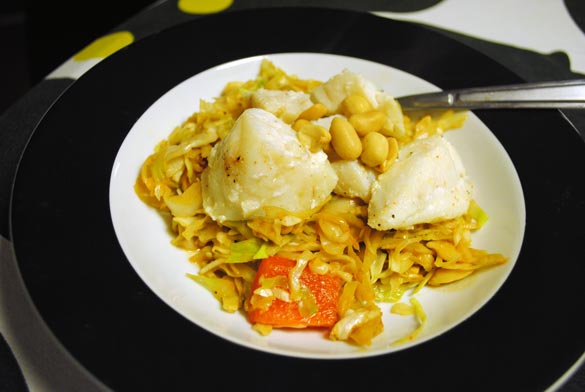 A few nights later, we invited ourselves over to a friend’s house to make sushi. 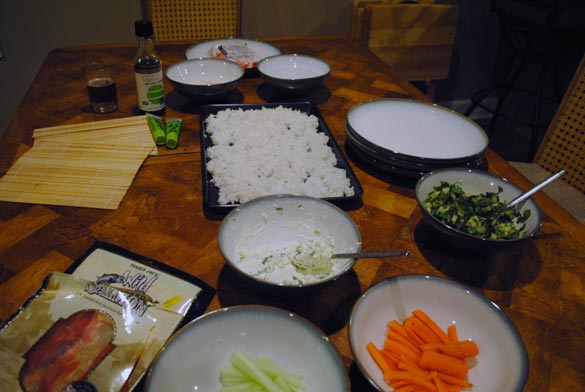 If you’ve never made sushi before, it’s a really good time, especially with buds and with lots of yummy fixin’s like cream cheese, carrots, cucumbers, lox, shrimp, crab and wasabi. 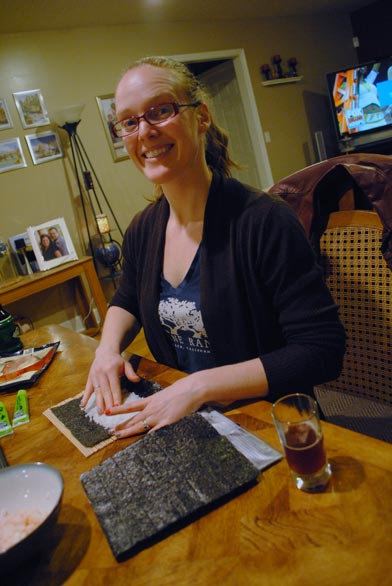 Everyone has their own unique style when it comes to rolling. This is how I roll — there’s lots of rice-patting involved. 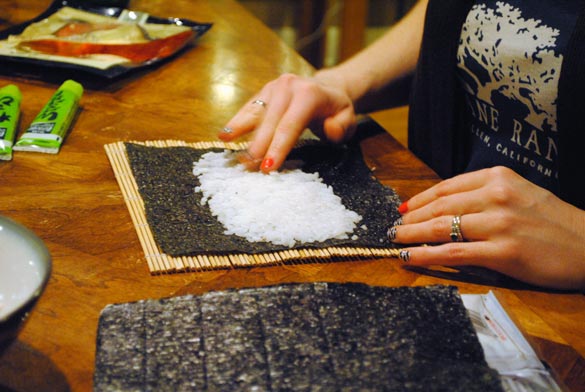 I tend to make really square rolls and go easier on the rice but heavy on the veggies — no surprise there, right? (Mine are on the far left; Ryan’s are on the right.) 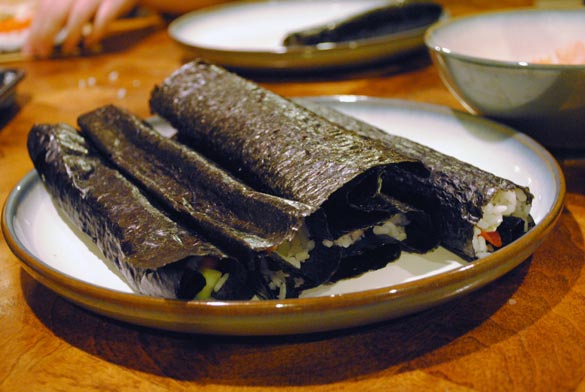 We started our meal off right with a bowl of miso with shrimp and tofu mixed in and fresh cilantro on top. I topped mine off with just a little Tamari Lite for extra flavor fun. 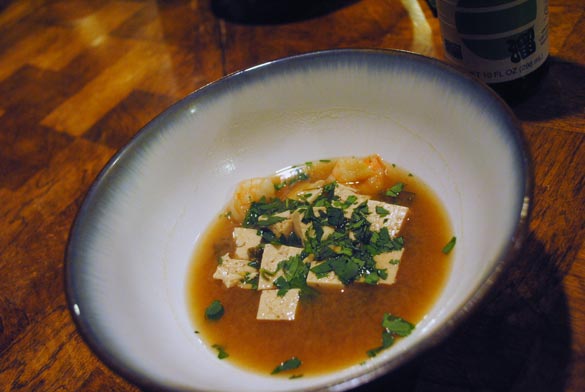 Then it was sushi time! (We let the rolls cool in the fridge for about 30 minutes before cutting them.) 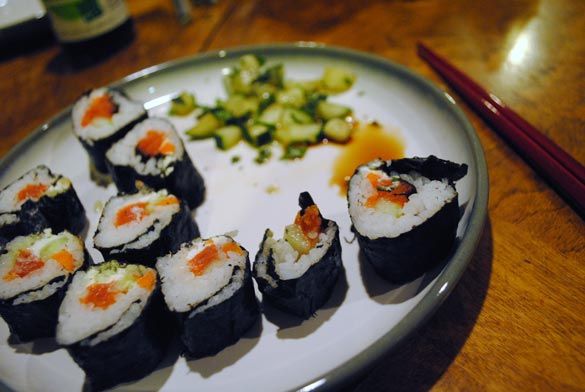 Although obviously my sushi technique needs work, these were really good with a little bit of wasabi and the gluten-free soy sauce. Everyone enjoyed them! (Again, here I go with tricking my friends into eating hippie food products.) 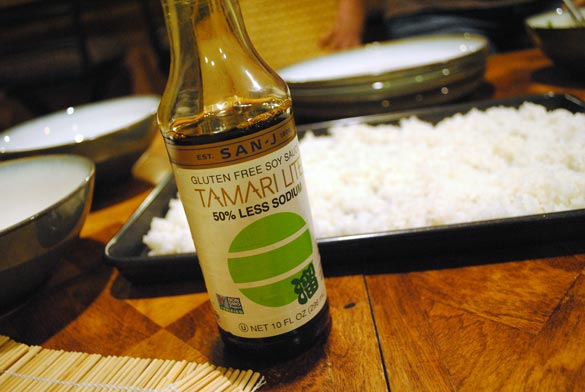 To go along with our sushi, I mixed up a quick cucumber and fresh mint and cilantro salad. Super refreshing, I dressed it with a mix of lime juice, rice wine vinegar and the — you guessed it — Tamari Lite. Was a nice almost relish-like addition to the meal. And not overly salty at all! 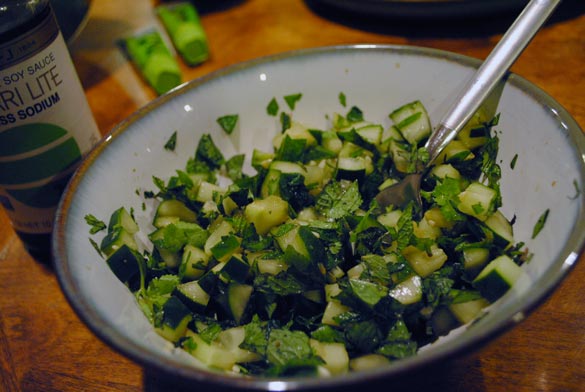 So, yeah, Tamari-Lite, I’m giving you two fit bottomed foodie thumbs up! And, I promise not to hoard you too much.
Do you go for low-sodium or gluten-free soy sauce? Try to find something that’s non-GMO? What’s your favorite thing to put soy sauce in? I’m ready to try it in new ways! —Jenn