Another November, another TriRock race. And, I’m pleased to report, another PR!

As you might know (because I basically haven’t shut up about it for weeks), I hurt my knee back in September and have been working hard to get to a place where I could at least participate in the TriRock Clearwater intermediate distance. I’ve religiously gone to physical therapy and massage therapy appointments, I’ve iced, I’ve done very little running but focused on improving my swimming and biking, and by the time I arrived at packet pickup, I knew I was ready.

Well, as ready as I could be considering I hadn’t run more than four miles in a couple of months.

There were a couple of big differences for me this year compared to last year’s TriRock. For starters, Jared wasn’t there with me — he was out of town for work and would be on a plane during the race itself, so no chance of a pep talk from him if I had a hard time. But, that was okay. I went down with my friend and coach, Patrick, who was also doing the intermediate distance, and met up with another friend, Della, who was doing the sprint as her very first triathlon. (P.S. They both rocked it. Hooray!)

Having other people’s races to think about was great — it helped me keep my own nerves at bay. That is, until about 9 p.m. the night before the race when I started laying out my race gear and realized I’d forgotten an entire bag of Very Important Things. Things like my asthma inhaler, my sport sunglasses, my watch and my race belt, just to name a few.

After a little deep breathing, I was able to work around pretty much everything. Patrick let me use his watch, I was able to buy a race belt in the morning, and I just wore the sunglasses I’d worn down for the drive (fashion and function FTW!). As far as the inhaler went, I just knew I’d have to stay aerobic and not let my heart rate get out of control. Shoot, if I could do that for Leadman, this shouldn’t be a problem, right? 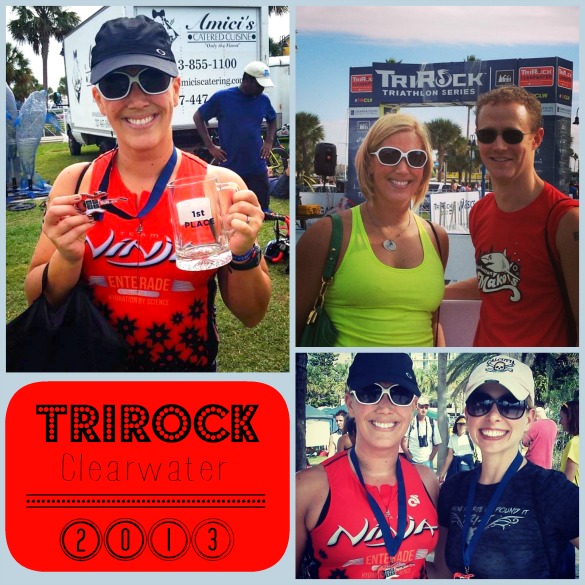 At the race with Patrick, with Della, and that coveted beer mug trophy.

I started out pushing for the front, but it was a rough bunch and I realized that even if the effort of swimming at that pace didn’t get me gasping for air, the adrenaline rush from fighting through a pack of aggressive swimmers would. I opted to hold back a bit and actually really, really enjoyed the swim. Which probably means I could’ve gone a lot harder, but I heard a lot of people complaining that they thought it was quite rough, so I was pretty happy with my decision.

And, honestly, I don’t think the actual swim was much slower than last year’s; it was the running up the beach that really got me, both from a breathing standpoint and knee pain. Happily, this was one of only a few times when knee pain was a factor.

My first transition went pretty smoothly: 4:06, an improvement over last year’s time of 6:34 when I got stuck in wetsuit, but there are still many, many seconds to shave.

I was really, really hoping to see a better bike, and an improvement of almost a mile per hour definitely qualifies. I was a little surprised at the first big-ass bridge — I’d remembered them from the year before, but thought that since I’d actually worked on hills this summer, it would be easy this time. It wasn’t. I struggled on the first and third causeways, but no more than just about everybody else.

My bike-to-run transition was much better than last year on account of the fact that I wasn’t in severe and debilitating pain. I still took my time, lowering my heart rate and shaking out my legs, but my 3:41 transition beat last year’s 5:38 suckfest.

It will surprise nobody that I’d envisioned this going a little differently prior to screwing up my knee, but I’d promised myself that I wouldn’t worry too much about pace. I was just going to focus on the fact that I was out there and able to participate.

There were points on this run when things hurt so badly — not so much the injured knee itself, but all the muscles that were not used to running so far because of the injured knee — that I honestly didn’t want to push through to the finish line. I was working really, really hard to go … not very fast. But at least I wasn’t on the sidelines, and as the finish line came into view, I knew I couldn’t have actually given up. I just love that feeling of accomplishment too much.

My overall time was 3:17:34 — about seven minutes faster than the 3:24:47 finish from 2012. And that faster time came with a first place finish in the Athena division (and another beer mug trophy)!

Once again, I loved the race itself — it was well planned and very well run, as both friends participating with me agreed. And even though I’m not completely thrilled with my finish time, I’m pretty excited to know that, barring (yet another) injury next fall, I should be able to finish even faster in 2014.

Guess I haven’t seen my last PR just yet.

Do you have races you do year after year to gauge your training? —Kristen