So you took on the FBG challenge to create some fabulous goals (and answered the “whys” that go along with them.) Good for you! Setting goals and taking that first step to a healthier life is awesome and amazing and all things wonderful in the Fit Bottomed Girls Guide to Being the Bomb Dot Com.

I was there around this time last year. I had tried an alkaline challenge to see if it would help my gut issues, and it ended up opening a world of healthy eating situations that I hadn’t encountered. Situations that I will now share with you to help the process go as smoothly (and effectively) as possible. Here are my great expectations (sans the scary Miss Havisham!) for what to expect when you decide to eat healthier.

8 Things to Expect Once You’ve Decided to Eat Healthier 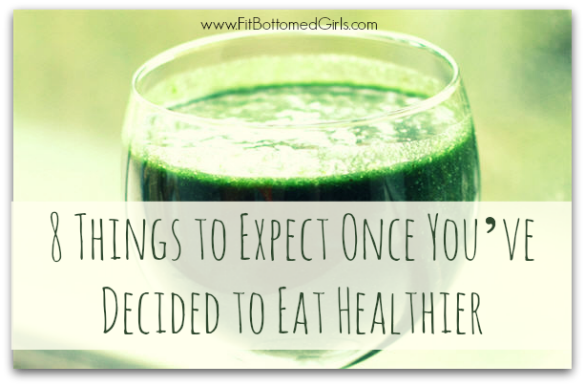 1. You’ll freak out about your lack of choices. So you’ve decided to give up [fill in the blank].  In my case I had to give up dairy (I’m lactose intolerant and was sick of feeling sick after a meal … the pain suddenly was no longer worth it), gluten and sugar. I gave up three rather large components of the typical American diet. Because of that, combined with the fact that I didn’t cook much, I was suddenly overwhelmingly scared that I could eat nothing. Not true! There are so many delicious meals I’ve experienced since giving up the three amigos of gut distress. The key is to remember that whole foods are your friends. And by “whole foods” I mean foods that have only one ingredient in them. Paleo recipes help, as do vegan recipes for my fruit and vegetable delights.

2. The haters may come out to complain. Be prepared for the haters! I don’t know what it is about food that makes people so angry, but you tell some people that you’re dairy-/gluten-/whatever-free you are and they might have a nasty reproach to your choice. They’ll tell you about the fads and the silliness, but don’t listen. Finding a healthy meal plan that works for your wonderful, completely personal tummy is just that; it’s YOUR personal plan and YOUR tummy. People may mean well, but for the most part it’s just them projecting. Most importantly, if one of these so-called friends tries to shove something you’ve given up in your face, scram quickly! That kind of behavior is toxic!

3. You may experience some not-so-delighful detoxing effects. Speaking of toxic, you’ll more likely than not experience a form of detox. Many who give up processed foods experience drug-like withdrawals once they’ve opted for a more healthy diet. If you’re going from fast food to home-cooked meals made with wholesome treats then you could very well experience skin breakouts, gas, bloating, body aches, brain fog, fatigue, low energy, headaches, irritability, extreme cravings (for sweet, salty or other unhealthy foods), constipation and diarrhea. I personally went through the skin breakout phase to beat all skin breakout phases. I turned into a pre-pubescent teenager! I was so freaked out and hadn’t a clue that it was my body’s way of removing the toxins I had been storing in my body. Let the processes happen. It sucks while you’re going through it, but it’s only temporary and then you’re left with a wonderful body, cleansed of all the bad things that were leaving you sick, fatigued and out of shape. P.S. Your skin gets better, too.

4. You’ll start to seek out foodies who follow your particular plan. You’ll never be alone. Everyone’s got something their stomach can’t handle very well, and they’ll create recipes that avoid the baddies they can’t have … and they’ll publish those recipes and share them with you. I’ve found a rather large community of folks who don’t do dairy like me. They’re called vegans, and I love them for introducing me to a life that’s fully capable of not having ice cream and creamy pasta sauces. You’ll find your clique of recipe makers and life will be swell.

5. Stick with it, and you might get addicted. I swear something happens to you once you start eating to feel better. You won’t want to feel bad after eating. I used to think it was completely normal to feel miserable after a meal. It meant I had eaten well and filled up appropriately. Not the case. Now after eating well I feel full like I should, but I don’t feel stuffed to the point of feeling sick. I feel energetic and happy post meal and THAT is a feeling you become addicted to having.

6. Your belly will change. People ask my husband all the time what’s the best way to lose the extra weight they’re carrying in their waste and belly. When he tells them to eat better; that no amount of crunches will attack those areas like a good diet will they get annoyed, but it’s true. I’ve worked out for years, with subtle changes. Three months into eating better and I dropped pounds I didn’t even think were possible and my belly went flat. FLAT folks!

7. You’ll slip sometimes. Diet changes are hard, yo! Please do not feel bad if you slip up and have whatever it is you’ve cut out. There’s no right or perfect way of eating. Remember, everything in moderation and do as your tummy dictates. We’re all so different, and if you don’t embrace that fact you’ll suffer on this quest to eat healthier. While giving up dairy was a no-brainer for me because I literally get flu-like sick when I have it, gluten and sugar aren’t things I avoid at all costs. I don’t punish or get angry with myself for having something sweet or gluten-y. As long as my body doesn’t reject whatever it is I’ve eaten, I move on with my day. I just try to keep to the 90/10 rule. I eat 90 percent healthy; making healthy choices is the rule and my indulgences are the exception. I ate donuts on my wedding day. I will sip a sugary-cocktail at a celebration without batting an eyelash. I’m human! You’re human! Don’t beat yourself up. You’re much too awesome to be mean to.


8. Going back to the dark side will be harder. Yeah, once you eat “clean” long enough, trying to go back to naughty foods will hurt more than you expected! There’s a reason I don’t eat gluten and sugar a lot. Number one reason: I toot like a mother trucker now if I eat sweets or processed carbs (aka gluten). The gas, oh the gas! It actually hurts, so while I will sip a blended coffee occasionally, I can’t do it often and I definitely won’t if I expect to be around other people.

I’m a year and some change into my new eating philosophy and am happier and healthier for it. I do realize this is just my story, though. For those who have resolved to eat healthier I’d love to know if I missed any expectations for our new friends joining the club. And for those looking to join — let me know if there’s anything else you’d like to know about on this awesome ride you’re about to embark on. —Tish