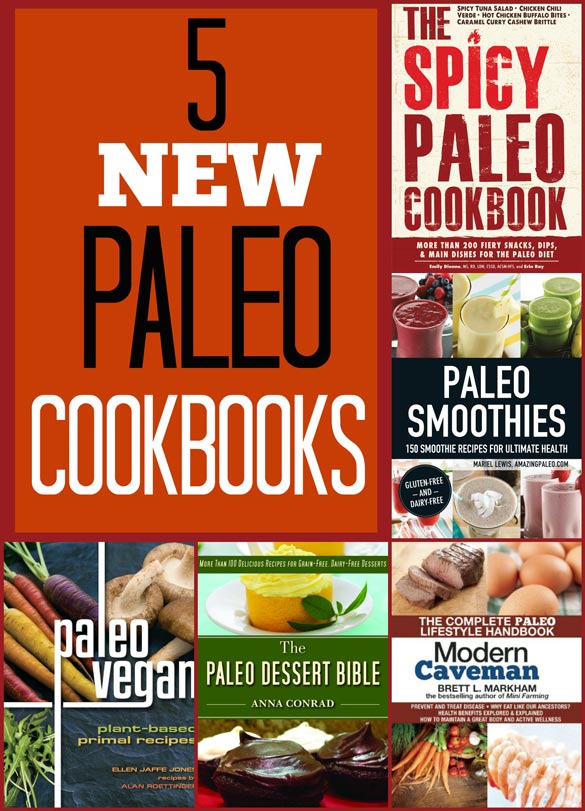 Gone Paleo? Interested in going Paleo? In a total Paleo rut? We recently got our food-loving hands on five new Paleo cookbooks that are sure to satiate any curiosity you may have about this increasingly popular way of eating. And if you’re already a Paleo devotee, you’ll get SO MANY new ideas for what to make for dinner, dessert or a snack — no matter what you’re craving!

1. The Spicy Paleo Cookbook. Love sriracha? Always ask for the extra hot sauce? Can’t get enough spice on your dinner plate? This Paleo cookbook is for you! Filled with 200-plus hot and spicy recipes, you’ll have fiery snacks, dips, main dishes and even desserts. We’re talking piquant pumpkin chipotle chili, wasabi-crusted tuna and caramel curry cashew brittle. With nothing but the recipes (no photos, no nutritional info, and no other materials to read or references except a conversion chart in the back), this is a no-frills recipe book for the dedicated Paleo peeps looking to spice things up.
2. Paleo Smoothies. If you’re like us, sometimes you get in a smoothie rut. And when you’re Paleo, your options to mix things up can get rather limited. Which is where Paleo Smoothies comes into play! With 150 recipes featuring veggies and fruits to blend up from the author of AmazingPaleo.com, this book is easy and fun to read, with a basic primer, section on why smoothies rock and each recipe has nutritional info. From Chocolate Avocado to Berry Chia and Cucumber Celery Lime, you’ll never be stuck in a smoothie rut again!
3. Paleo Dessert Bible. Paleo and dessert can go hand in hand! And this cookbook certainly helps you to fulfill any sweet craving you have with a Paleo twist. With more than 100 grain-free and dairy-free recipes, we’re talking recipes for bread pudding, fudge cake, lemon squares, pecan bars and pretty much all of your favorite non-Paleo desserts. Using mostly coconut and almond flour, you’ll love the photo-heavy layout (even if some of the photos seem a little amateur) and the beginning section on what to stock in your pantry. We do wish the cookbook included nutritional info, but there’s no doubt the desserts included are about as nutrient-rich as you can get for a sweet treat.
4. PALEO VEGAN: Plant-Based Primal Recipes. It’s funny; in a lot of cases you’ll see a lot of vegans and Paleo-lovers go head to head and differ on their opinions on meat and beans. But, these two ways of eating actually have a lot in common: they focus on whole, plant-based eats and they both shun dairy. And this cookbook celebrates those similarities! With recipes that are both Paleo and vegan, you can whip up Oyster Mushroom and Baby Bok Choy Curry, Roasted Pumpkin Dip, and Tuscan Kale with Chili, Garlic, and Black Olives. Not a boring page in the book.
5. The Modern Caveman: The Complete Paleo Lifestyle Handbook. Okay, so this one isn’t exactly a cookbook, but if you’ve been wondering about the Paleo diet, it’s a comprehensive guide to what it is, how it can be beneficial and how to get started. With a number of healthy recipes and exercises to help you begin eating and moving like a modern caveman, this book is for the Paleo newbie.
What’s your favorite Paleo cookbook? —Jenn