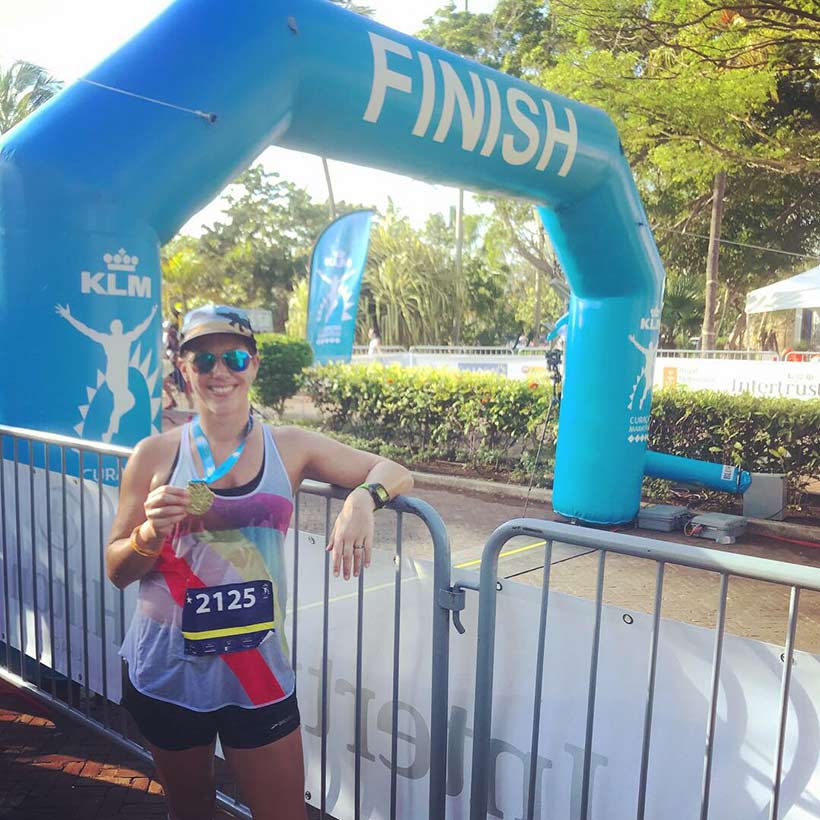 I have no problem with mapping out my own running route when I’m in a new city. After all, the best sightseeing is often done on foot, and when I can scratch my itch to be a total tourist and get in a run at the same, I’m all about it.

However, running around a strange city is even better when it’s done as part of a race. The logistics are covered, there’s hydration provided along the course, you often gain pedestrian access into areas you wouldn’t otherwise be able to run, and, of course, you’re out there with a whole community of other runners. It’s fun! It’s safe! And it’s awesome.

Last November, I had the opportunity to visit Curaçao — and participate in the KLM Curaçao Marathon — as a guest of the Curaçao Tourist Board. (Maybe you caught a bit of it in our Instagram Story.) In addition to the full marathon, there’s a half marathon, 10k, 5k, and a 9.7k trail run option, which was awesome because I was able to challenge myself with the half marathon distance, while my husband, Jared, stuck to the 10k. 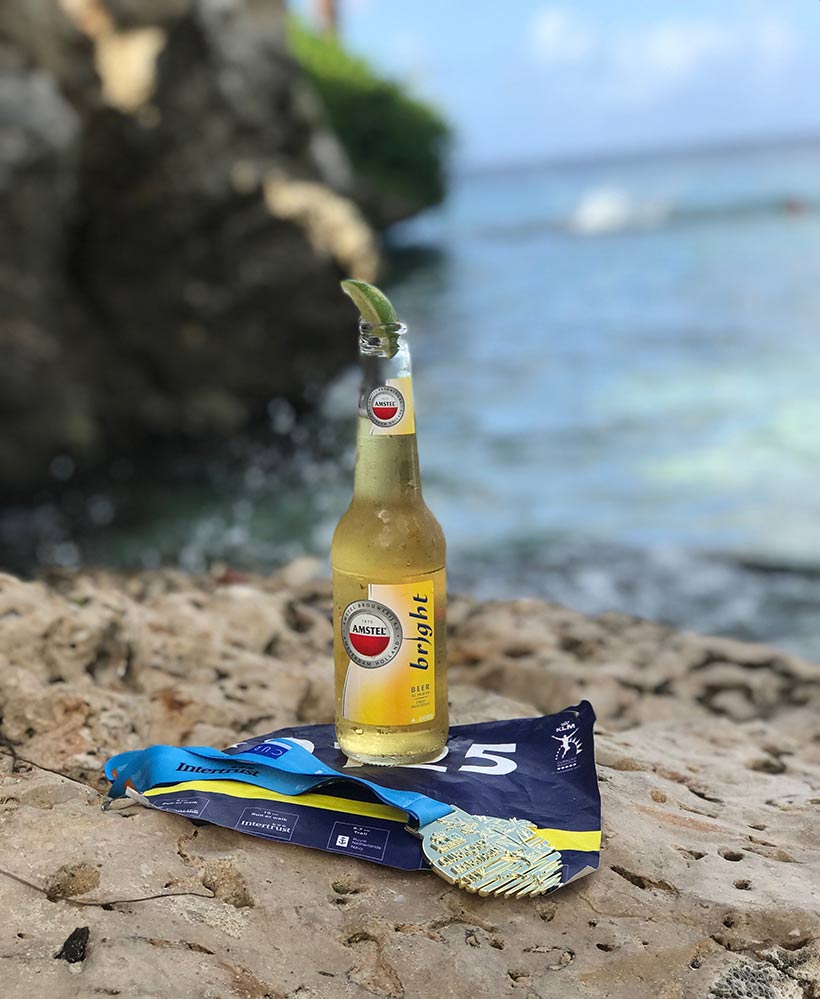 As you might recall, the half marathon distance is a bit of a wild card for me — I’ve had disappointing races that I trained like crazy for, while others have ended in PRs that I had no right to expect. In this case, I didn’t have a ton of time to train up to the distance, but because the half marathon course for this particular race loops all through and around Willemstad (while the shorter distances are less exciting out-and-backs), I was determined to get through all 13.1 miles.

And now, I’m going to take you through the course with me! Because whether you’re trying to get through what feels like a never-ending winter or trying to find some inspiration to up your running game, you might want to consider booking a trip to Curaçao for this year’s race on November 24, 2019 — and I want you to know what you’re getting into!

(And, of course, there’s a lot more to Curaçao than just running. See what else I did on my weekend away — like swimming with sea turtles, practicing a little SUP yoga, and doing my share of fine dining — here!)

Curaçao Half Marathon: Kilometer by Kilometer 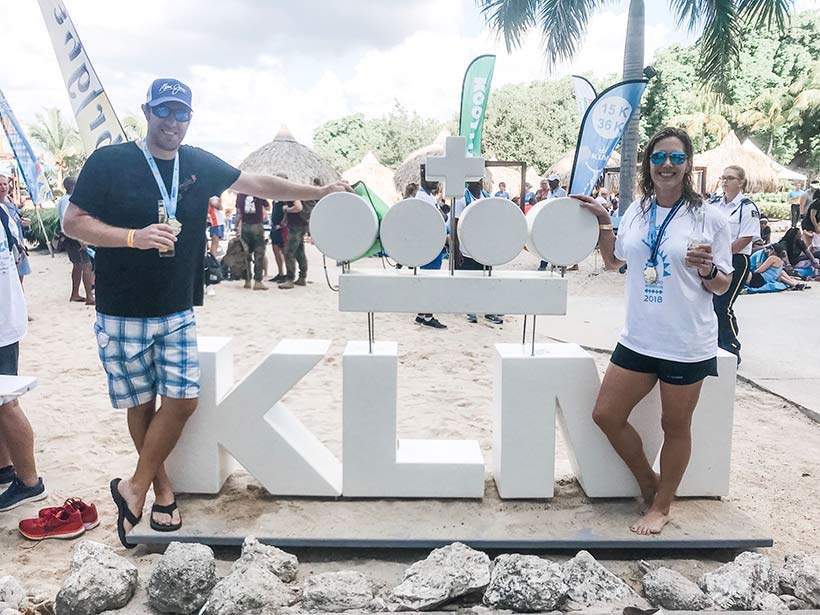 Race start: Jared and I stayed at the Hilton Curaçao, which is where the race starts, ends, and also where the post-race party takes place. I would definitely make the same choice again and encourage you to as well, because being able to wake up and walk straight down to the start line (not to mention being able to run upstairs for a quick rinse and change post-race) was incredible. This was even more helpful due to the fact that he and I were running different distances, which started an hour apart (start times are staggered by distance, ranging from 3:30 a.m. to 7:00 a.m. so that most runners finish within the same couple of hours or so).

Kilometers 1-6: The first hour was pretty dark (like, I could’ve used a headlamp on a few occasions. But even so, it was more hot and humid than I’d anticipated, which meant I was drenched with sweat by the time I hit the first notable landmark, the beautifully lit up Queen Emma floating pontoon bridge. I would be running over it later, but at this point, I simply ran by. Well, and stopped for a sweaty selfie, obviously. 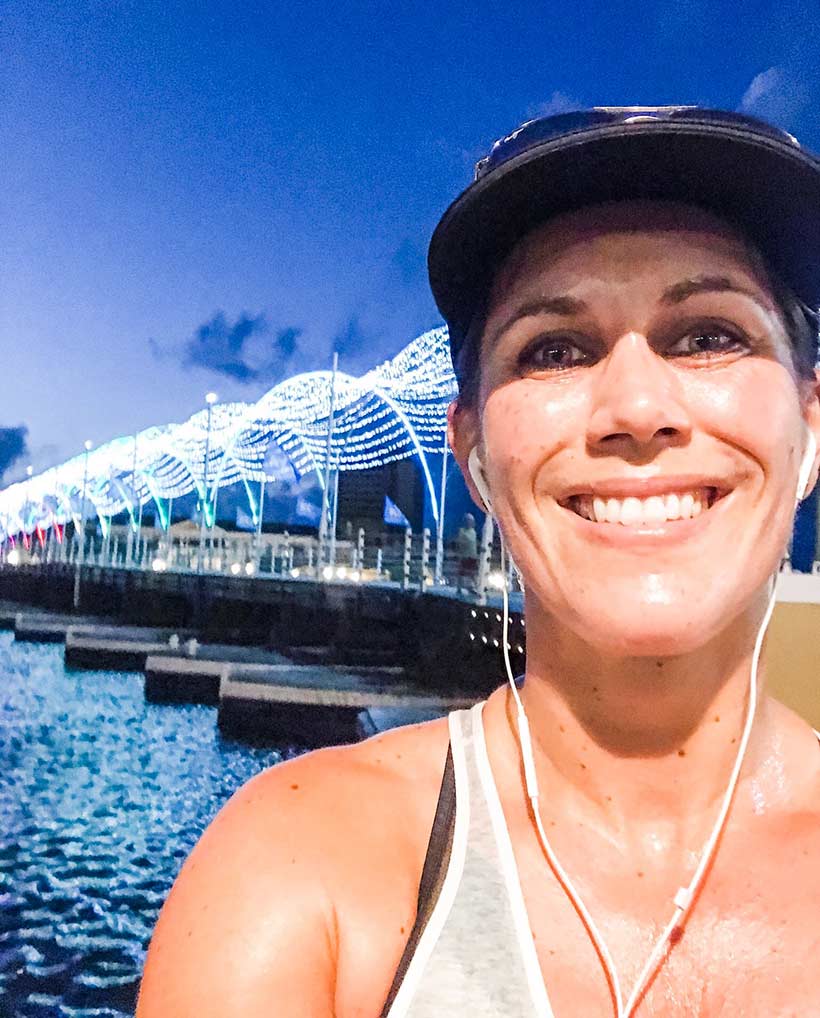 3 predawn miles doesn’t usually equate to quite this much sweat.

Kilometers 7-9: Things got quite challenging as we made our way over the Queen Juliana Bridge, which is 185-feet high and generally only open to motor vehicles. The climb was intense, but the views were fantastic. The sun began to rise as I started my descent and I tried to take advantage of the free speed the downhill offered. I hadn’t gone in with a goal time, exactly, but my average pace was slower than I’d anticipated. Even as a Floridian, that heat and humidity hit me hard.

Kilometers 10-15: This stretch was a mostly straight out-and-back, which wasn’t as exciting as the first few kilometers, but it meant that I saw other runners going the opposite direction, which I always enjoy. Because it was along a straight road, I was able to zone out and settle into a pace pretty well, although I took full advantage of every water stop, dousing myself with a cup and filling my handheld water bottle with another.

Kilometer 16: I won’t lie — I was struggling a bit at this point, but I did my best to stick to the strongest pace I could because this was near the 10k turnaround, and I knew Jared was planning to wait for me there so we could run in together — and so he could snap a photo or two. (Yes, this meant that his finish time was … not great, but it was a very cool and unique option that we weren’t going to pass up!)

Even if you don’t have someone waiting for you at this point, you’ll want to keep your eyes peeled for the big Curaçao sign at Queen Wilhelmina Park. If you’re one to take pictures during a race, this is a great photo opp. From here, we ran out over the floating bridge that I’d taken a selfie by earlier that morning. The sun was fully out now, and so the bridge lights had long since turned off, although it still offered a cool view of the colorful buildings and floating market as we made our way across. 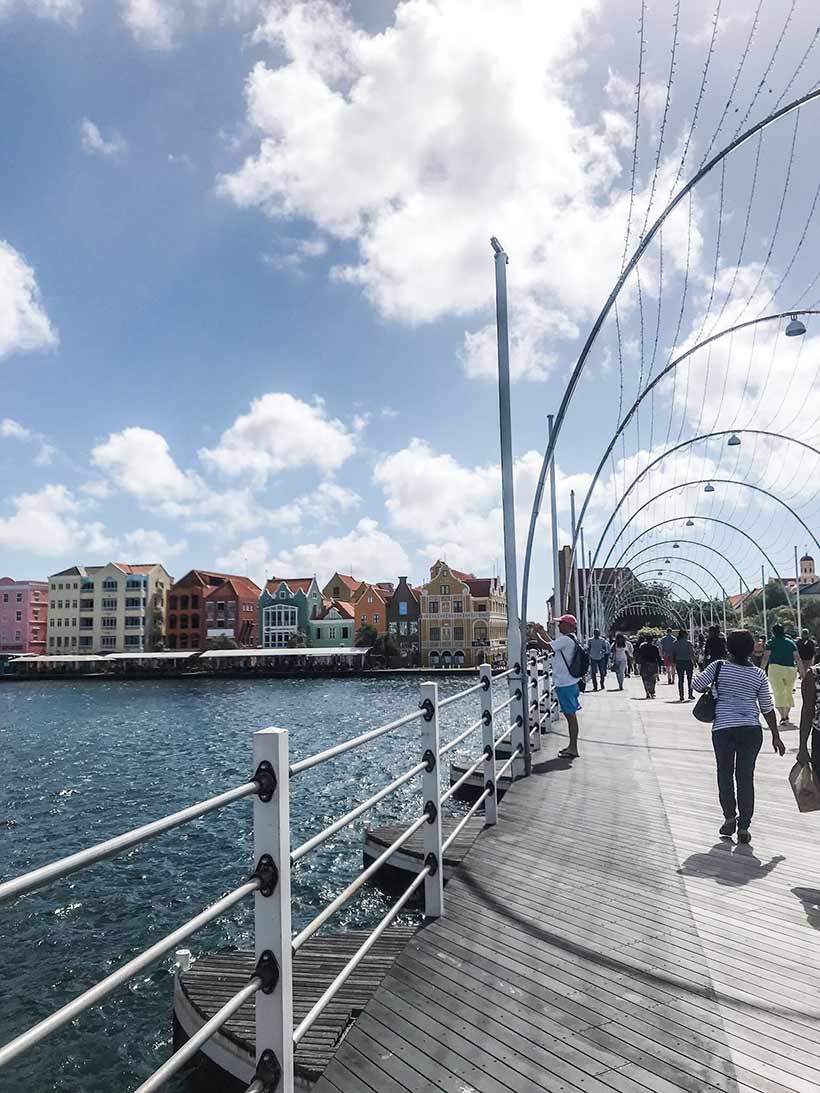 Kilometers 17-end: This final section of the run takes you through the outdoor Renaissance Mall and Rif Fort, then goes largely along the waterfront, providing a tempting view of what awaits you at the beach just on the other side of the finish line.

Post-race party: Because we stayed at the race hotel, we not only had the opportunity to pop up to the room to shower and change, but we also made use of the daily breakfast buffet that was included with our package — and it’s worth shelling out for, let me tell you. Otherwise, there was some standard post-race fare available to runners (bananas, oranges), as well as food and beer available to purchase. This truly felt like a party due to the gorgeous setting, the crystal clear water, the lively music, and the happy chatter in a variety of languages (Dutch is common on this Dutch Caribbean island, but because Curaçao isn’t far from Venezuela, I also heard quite a bit of  Spanish, as well as Papiamento, a Spanish Creole language spoken on Curaçao, Aruba and Bonaire — and literally everyone I met also spoke excellent English). 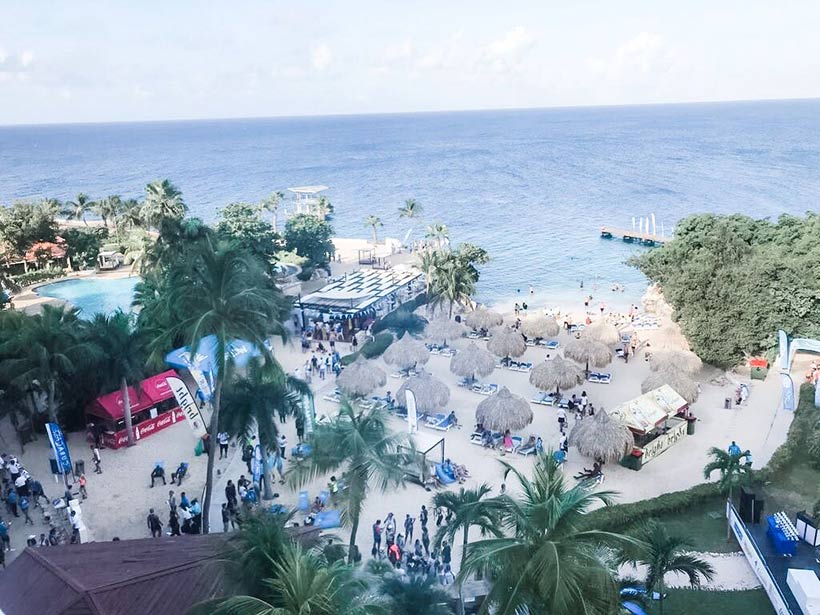 A view of the post-race party from our balcony.

It’s worth noting that, while everyone receives a medal, awards do not go as deep as you might be used to in the States. The overall winners of each distance received awards — and most people seemed to stick around to cheer for them, which was pretty cool — but they weren’t handed out to the top three men and women in each age group. Great for those of us who aren’t placing anyway (because those ceremonies take forever), but I could see that being a disappointment if you’re hoping to hear your name called.

All in all, though, I really loved the race experience — almost as much as I loved the country of Curaçao itself. If you’re someone who likes tying a race into a vacation, this is one to keep in mind.

Are you also all about the race-cation? What’s your favorite — and what’s on your bucket list? —Kristen