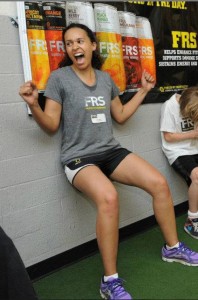 I want to do more of this in 2013! Credit: Jordan Strauss/Invision for FRS/AP Images

This week, as part of New Year New Rear Week, each FBG is sharing her healthy goals and resolutions for 2013 and recapping how 2012’s goals went down. So let’s get to it!

Oh, beloved perky Fit Bottomed Girls and their lovely perky goals. I wasn’t as thrilled as the other gals when I learned we’d be discussing our 2013 goals for New Year New Rear Week. Being a Type A perfectionist, I am still hellbent on my goals from 2012. (Why I wasn’t able to complete them all, yadda yadda.) Like always though, the universe sends me little nudges when I’m going off the intended path. I stumbled upon a great article by Mastin Kipp that said we can’t focus on the cause of our problems and voilà! Just like that I forgave myself for being human. I won’t dwell on why I wasn’t able to complete all my goals. I won’t focus on the problems, but more so on the outcome—the part where I thrive.

Speaking of thriving, since my progress report I’ve been able to check off one other goal. I am now officially able to say that I am an actor and mean it: I booked my first national commercial! That right there makes up for all the missed sports books in the world! I’m still working on that whole acid reflux/allergy/lack-of-energy problemo, but I’m hopeful for good change in 2013.

1. Find my rhythm. With all of the health issues I’ve had in 2012, I’m surprised I was able to get into the gym as much as I did. But I want to do more. My goal for 2013 is to get back into a regular workout schedule. I wish to get some exercise on at least four times a week. Whether it be hiking, the gym, whatever—I just need the energy to move!

2. Find the food allergies. When I was on set with Angela Parker, I told her about my lack of energy and the acid reflux debacle. She asked if I had been tested for food allergies. Of course I hadn’t, so I immediately made an appointment with an allergist. According to Angela, acid reflux is just a symptom of something else much larger, so now my goal is to figure out what I can and can’t eat. I’m sick of the bloating, fatigue, scratchy throats and crazy indigestion. I’m taking control of my health in 2013 and getting to the bottom of this health stuff!

3. Find some mental peace. Jenn is awesome when it comes to sharing. When she started the Oprah and Deepak Chopra 21-Day Meditation Challenge, she sent it to me as well and I got hooked. Because of her, I’m now on a quest to find some more of Deepak’s meditations to do. I have a monkey brain like no other. I never thought in a million years I’d find benefit and peace in meditation, but these  are so user friendly. I did the meditations every evening and found myself floating on zen-ful air. I wish to find, capture and bottle that feeling as much as I can in 2013! If you have suggestions for good meditations on tape, holla!

4. Find those muscles! I won’t focus on why I wasn’t able to see the muscles go pop in 2012. Instead, I’ll just carry that good goal into the New Year and see if I can rock my arms out.

What about you? Are you still focused on why certain 2012 goals went awry or are you already focused on 2013?  —Tish