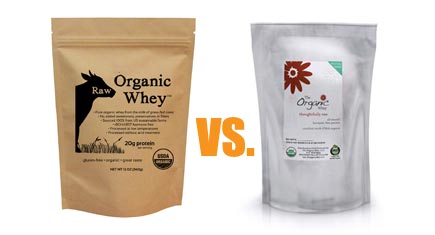 Last time it was chocolate cereal, and today the grass-fed cows are going head-to-head in what will be an epic organic whey protein powder battle. That’s right; we said epic. So get out those whey-protein recipes and say it with us now…FOOD FIGHT!

Raw Organic Whey: A five-tablespoon serving of this stuff has about 100 calories, 1 gram of fat (saturated), 52 milligrams of cholesterol, 2 grams of carbs/sugar, no fiber and 20 grams of protein. It also boasts 15 percent calcium for the day.
The Organic Whey: A four-tablespoon serving of The Organic Whey has about 80 calories, no fat, 8 milligrams of cholesterol, 3 grams of carb (1 that is sugar), no fiber and 15 grams of protein. It also has 9 percent of your calcium needs.
Winner: Now this is a bit tricky because they have different serving sizes. However, when you do the math, they’re really, really close. Calories, fat (assuming The Organic Whey has a little less than a gram, which means they aren’t required to list it), fiber, carbs, sugar and protein are about the same. Cholesterol is a touch higher in the Raw Organic Whey, but it also has more calcium. So…again…we’re calling this a draw! Both are A-okay in our fit books!

Raw Organic Whey: Now this is an ingredient list we love: “organic whey protein.” Boo-yah! In addition, it comes from cows raised on small, sustainable farms in the U.S. without the use of any pesticides, hormones or GMO. It’s gluten-free and is considered raw because the whey hasn’t been overly processed with heat or acid.
The Organic Whey: Same as Raw Organic Whey, there’s nothing in this stuff other than what the brand name promises. Also, sourced from grass-fed cows on sustainable farms in the U.S., it’s also hormone-free, non-GMO, gluten-free and cold-processed.
Winner: Don’t hate us. We’re calling it a draw again. Seriously, it’s like we’re basically testing the same exact stuff here! Even when you look at price—Raw Organic goes for $35 for 12 ounces, Organic Whey goes for $40—they’re neck-and-neck!

Both of them! We cannot determine a superior organic whey protein powder because they both rock! With extremely similar nutritional profiles and ingredients, the only way they really differ is taste, and the one we like more is totally situational. So…we say try them both and see what YOU think!
Have you ever tried plain organic whey protein powder? Love it? Like it? Loathe it? —Jenn