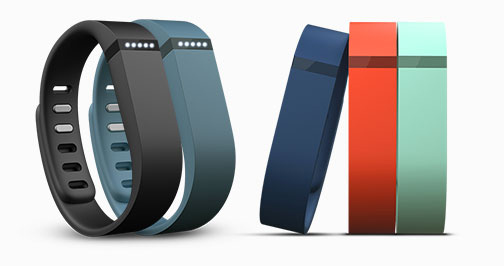 See those bands above? That’s the new Fitbit Flex. Kinda fun looking, right? And certainly a new twist on the original Fitbit and Fitbit Zip. Unlike the other Fitbits that you wear on your waistband, you wear this new activity tracker like a bracelet. Seeing that I know a few friends who have lost their Fitbits when working out or just around the house (the washing machine is a major culprit!), this new format — which is similar to a Jawbone or Nike FuelBand — is a nice change. It’s fairly comfy to wear, is sweat- and water-resistant (and good thing, too, since I took a shower with it on without a second thought my first day!), and it’s neutral and simple enough that you can wear it with pretty much everything, as long as you’re not going to a formal party or something.

It’s also pretty fun and simple to use. Which is a huge plus as so many of these things can be intimidating to set up for those of us who are sometimes less-than-tech-and-directions-savvy (*points to self*). Like the Fitbit Zip, setting this thing up couldn’t be any easier. The directions are short and simple, and there are basic illustrations. It only took me about eight minutes to go from opening the package to wearing and using my Fitbit Flex, and that was including downloading the software for my computer and the app that allows you to sync the tracker and see your stats on the go. Pretty fast!

The Fitbit Flex measures your steps and activity, along with being able to track your sleep and how many times you move in a night. (If you’ve never tracked that, it’s illuminating — apparently I rustle around about 10 times a night, no matter how long or little I sleep. Random!) On the site/app you can set goals, track your food and other workouts, interact with other users and more. You can even set the Fitbit Flex to act as your alarm, giving you a little vibrational buzz when it’s time to wakey-wakey (eggs and bakey!). Again, really fun and very user-friendly.

Unlike the other Fitbits where you can toggle through your stats from the device itself, the Fitbit Flex is a little different — and a lot more limited. To see how you’re progressing towards your step goal for the day, you simply tap the device a couple times and these little white dots light up. Each dot that’s shown represents 20 percent of your goal. See all five dots? You’re a freaking goal-reaching rockstar (and it does this fun buzz thing when you reach that final dot). See just one or two? You’ve got some walking to do!

The tapping is fun; and it’s a nice way to check in. I did kind of miss the time and other features offered in the other Fitbits, but for beginners or people wanting something basic, it’s nice and still a great motivational tool to move more. And one quick word of caution with the tapping: tapping any part of your hand will set the band off. I had it go off when I was putting on make-up (you know when you bang your liquid foundation on your hand to get that last bit out?), and it lit up like crazy when I was chalking up my hands for this workout and clapping at a concert. It’s not a big deal that it does that, but I’d have to imagine doing so eats up battery faster, so just something to be aware of.

Again, I’m not sure that this is the best activity tracker out there. But for newbies or those who don’t want something overly complicated (or keep losing their clip-on Fitbit!), it’s good stuff. And at just about $100, it’s pricey, but not that pricey for an activity tracker.

Do you wear a Fitbit? Which model is your fave? —Jenn