I’ve gone on the record numerous times as saying that while I have mad respect for marathon runners, I, personally, have zero interest in running 26.2 mile road race. Seriously — I’ve never been tempted to even consider it.

But that doesn’t mean I’m content to stick to regular ol’ half marathons. No, you guys know me — I like to push my boundaries and try new things. So, when I heard about an inaugural trail run in my old hometown of Gainesville, Fla., I was quick to sign up.

I knew a few people opting to run the 50k, but I was perfectly happy to stick to the shorter 25k distance. After all, I’d never run more than a little over 13 miles in the past, so jumping to 25 km — which technically equates to just over 15.5 miles — was already going to be something new and exciting. And hard — let’s not forget that part. 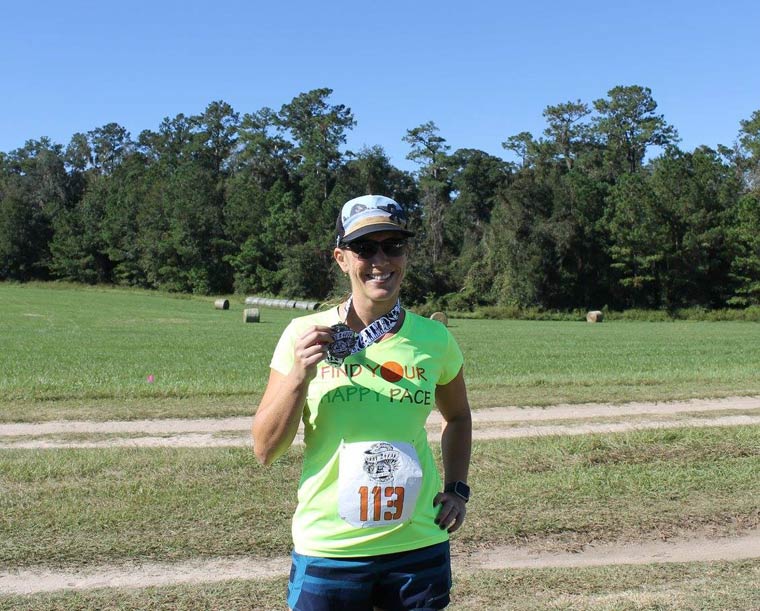 So, spoiler alert — I finished and avoided any serious injury. Hooray! But, if you’re interested in more details about my first ever 25k trail run, here’s the breakdown.

I stayed with my friend Sarah the night before the race, and thank goodness I did. She’s done numerous trail races and gone on loads of hiking adventures, so when I realized that the hose to the bladder for my Camelbak was totally moldy 10 minutes before we were supposed to leave, she jumped to the rescue by providing one for me to use. And that wasn’t just a nice-to-have item — this race expressly stated that anyone showing up without hydration would not be permitted to race, period. So! Thanks Sarah — I owe you. Big time.

I got to the race venue without too much time to spare. I met up with some friends who’d come up from Sarasota, and spent a few chilly moments catching up with old friends from Gainesville. Many of the people I trained with for Ironman 70.3 Augusta were participating, along with loads of people from my old running groups, so I flitted from one pack of people to the next, right up until the gun went off and the race began. 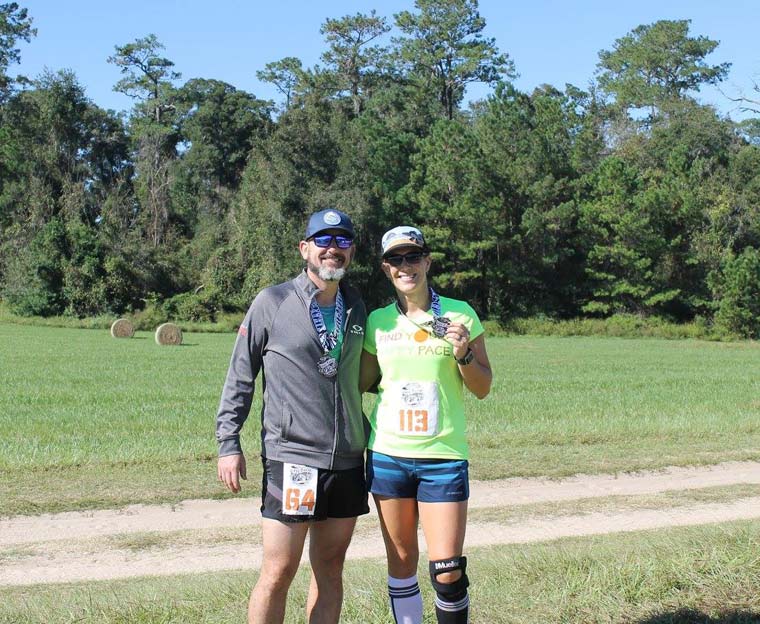 My friend Kevin came in just a biiiit ahead of me, earning fourth place overall. Woot!

(*Here’s where I need to make a note about the mileage listed here. I used my waterproofed Fitbit Blaze to track my distance, and I have never, ever had an issue with it being off on distance … until this race. This will become very important in a moment.)

I started out with my friend George, who recently completed his first full Ironman in Chattanooga. We talked about his experience, his goals going forward, and he picked my brain a bit on what he might want to look for in a triathlon coach in order to have a really strong performance in his next Ironman races. 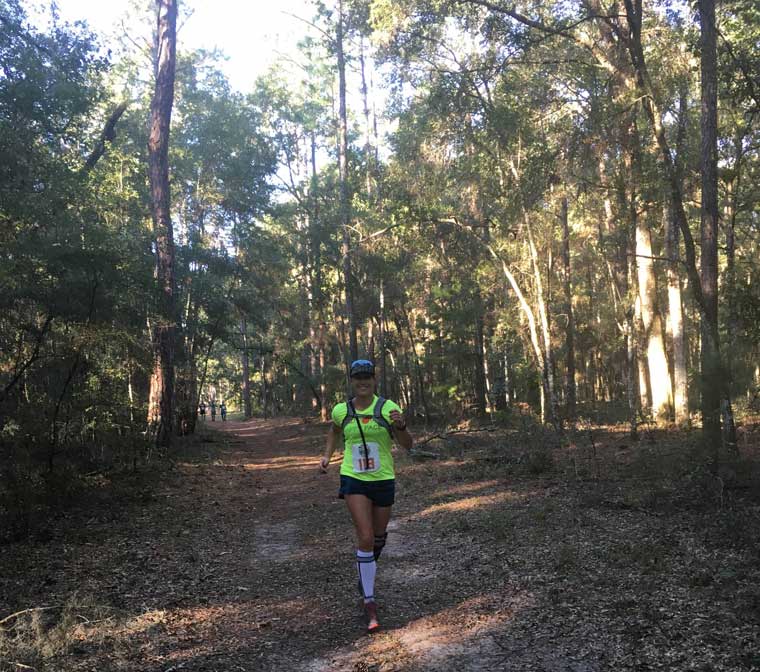 The first mile or so was extremely crowded, which I’m sure was frustrating for anyone champing at the bit to get going, but I didn’t really mind — it helped me start off easy, so by the time George and I were able to run more freely, we were warmed up and fell into a nice, comfortable, conversational pace. Before we knew it, we hit the first aid station, where I grabbed some sports drink, and a mile or so later, when I slowed to take a little extra nutrition from my stash, he felt good enough to be able to take off, so I covered the rest of the route more or less on my own.

To say I felt great out there would be an understatement. I had planned to stick to a run/walk, like I usually do, but for once in my life, running felt amazing and I didn’t want to mess what was working. I guess it was a mix of factors — I’d trained reasonably well for the race, for one thing, and it was legitimately cool out so my body heat and breathing never became an issue. Plus, I was out on some of my favorite trails in the world, and couldn’t have been happier about it.

At this point, I thought I could run forever. Turns out that was not entirely accurate.

I felt almost like I was flying as I hit the second aid station. I got more sports drink and also tried eating a Fig Newton — I usually stick to things like gels and chews when I run as opposed to “real” food, and I had a bit of a hard time with the cookie drying my mouth out. There were also PB&J sandwiches that smelled fantastic, but I couldn’t imagine being able to handle peanut butter at that point, so I stuck to my cookie, then took off.

I felt a little confused about where this aid station came in terms of mileage — I thought it should’ve been closer to the halfway point rather than 9 miles in — but I hadn’t studied the course map and assumed it was just because of the loopy nature of the trails. (This? This also becomes important very shortly.)

Around mile 12, I started to experience a bit of muscle fatigue. I was still keeping a pretty decent pace, for the most part, but the rockier, rootier, trickier surfaces became increasingly more challenging. I had a couple of stumbles and near-ankle rolls, but saved any walking breaks for terrain that was truly difficult.

I began counting how many people I’d passed since the second aid station and was excited to realize I was into the double digits by mile 15. So, thinking I just had a mile or so to go and wanting to finish strong, I picked up my pace.

It turned out this was not my best idea ever.

I’d used a few mantras for the first portion of the race, including, “Smile and do the work,” and, “You will because you can,” but as the miles ticked by, the predominant thought in my head became, “Shouldn’t I be done by now?” (peppered with some other choice words).

Guys, that is not a good place for your head to go when you’re still miles from the finish.

I’m not entirely sure what happened — I’m assuming my watch was just plain off, but it’s also possible I went off the trail for a bit at some point and magically found my way back. But, regardless, my watch’s distance was pretty far off the actual 16.5 mile route, and I hadn’t realized how much it was off until I hit the last aid station (which was also our first one — meaning I knew I had miles to go).

It’s hard to watch your goals go out the window due to a miscalculation. I’d gone into the race just wanting to enjoy myself and finish, but, as I trucked along, I found myself getting all optimistic, thinking, “Oooh, you’re gonna come in under 3 hours. Maybe even at 2:45!” Arbitrary numbers from the outside, but they were spur of the moment goals that I’d gotten quite excited about — goals that got me to push myself to run when I would’ve rather walked numerous times.

With my goals completely shot and clueless as to how much farther I actually had to go, I felt pretty adrift. The only thing that got me to pick up my pace was the occasional sound of a group of runners behind me — I’d passed them a few miles earlier and I was going to do my damnedest to keep my lead.

Around mile 17, I tripped hard on a root and, well, I’m very glad there was a tree there to catch me, or I would’ve face planted for sure. Close call, and all I could think of was how angry I would be if I fell and really injured myself at this point and couldn’t finish. I’d run so far already — I wanted to cross that finish line on my own two feet. And that helped me push through the rest of the course.

I had more bearings on my surroundings for the last one or two miles of single track, but the speedier 50k runners were heading back out on their second loop, so there was much stepping off to the side to allow them to blaze past me. Hey, I wasn’t going to break any landspeed records at that point, but I sure wasn’t going to — literally — stand in their way! 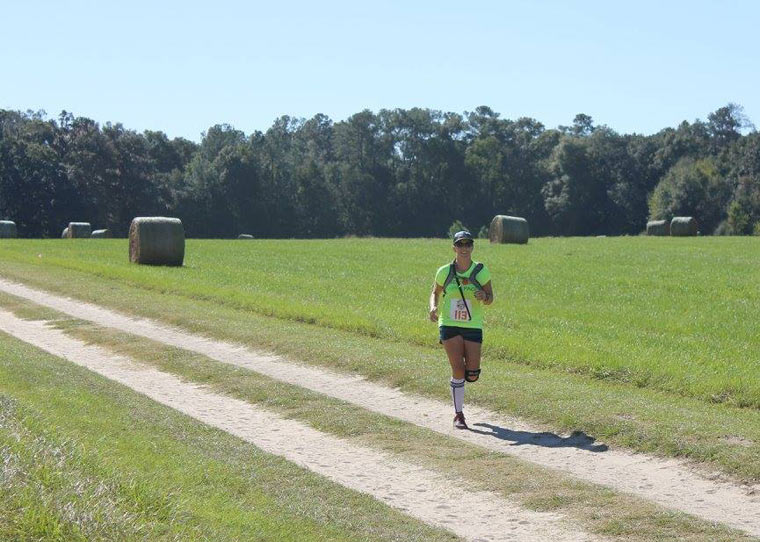 As the woods opened up to a field, I could hear music from the finish line and got a second (or third, or, hell, at that point maybe twelfth?) wind. I picked up the pace and ran it in with everything I had. There’s nothing like leaving it all out on the course, and I can say with confidence that that’s exactly what I did.

My final time was 3:24 — a far cry from that 3-hour goal I’d gotten in my head, but since it was my first 25k trail run, it was an automatic PR and I WILL TAKE IT with pride and a smile. And a beer comes with that, right?

Have you ever run a race and gotten way off on the distance, either due to the course or your watch? Were you able to keep your head right or did it take you to a dark place, too? It’s amazing how much that miscalculation affected me. It didn’t change the actual mileage I ran, but you wouldn’t know it based on how I felt! —Kristen